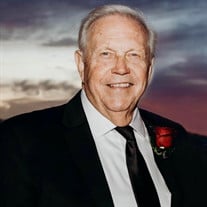 William “Bill” Teasdale entered his eternal rest on November 27, 2021 surrounded by loved ones. His 82 years on this earth were filled with love and many accomplishments both personally and professionally. Bill was preceded in death by his son, Billy, and his daughter, Dawn. He is survived by his wife, Kay Teasdale. He and Kay spent 64 years happily married and traveling the world together. He will be lovingly remembered by daughter, Terre, and husband, Todd. Grandchildren: David, Angela and husband Billy, Amber and husband Tyson, Truett, Travis and wife Ali, and Sam. Great-grandchildren: Julian and Porter. Bill had a lifelong passion for learning and he received a B.S. with honors in Electrical Engineering from the University of Texas Austin in 1963 and a M. S. degree in EE from the University of Houston in 1969. He was a member of Eta Kappa Nu and Tau Beta Pi, and was a Registered Professional Engineer in the state of Texas. From 1963-1965 Bill was employed by the Westinghouse Corporation where he was involved in the design of advanced defense communications systems. Later, in 1965, he joined the General Electric Company where he served as a systems design engineer and a project engineer for space vehicle electronic systems. In 1966, he was employed by NASA Johnson Space Center where he worked in the telecommunication system division analyses. Bill was involved in the engineering and development of spacecraft communications systems and flight avionics systems of the Apollo, Skylab and Shuttle Programs. This organization was responsible for the communication between the spacecraft and earth. This communication system was the one used to transmit voice and television signals from the lunar surface. While working at NASA, he held a Texas Real Estate Brokers’ license and also sat on the Pearland planning and zoning board. Bill will forever be remembered by those who knew him as a man of few words, but when he spoke, everyone listened. He was a devout Christian and served as a deacon and an elder at the Pearland Church of Christ. He was currently a member of Southeast Church of Christ in Friendswood. The family wishes to extend its sincerest gratitude to family and friends for their thoughts and prayers. In lieu of flowers, the family requests donations be made to the American Heart Association.

William &#8220;Bill&#8221; Teasdale entered his eternal rest on November 27, 2021 surrounded by loved ones. His 82 years on this earth were filled with love and many accomplishments both personally and professionally. Bill was preceded in... View Obituary & Service Information

The family of William Edward Teasdale created this Life Tributes page to make it easy to share your memories.

Send flowers to the Teasdale family.