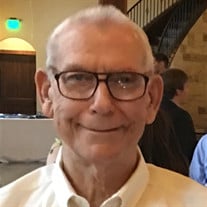 William (Bill) T. Brewster went to Heaven on March 30, 2021 due to complications from pneumonia; he also battled heart and kidney issues for the last two years. Our prayers are that he is now beyond suffering and with his Savior. Bill was born to A.J. and Christine Brewster in 1939 into a farming community outside of Abilene, Texas. He was the youngest child, preceded by his sisters Bobbie Louise and Patsy Joan. Bill described his youth as equal parts hard farm work and exploration. He dealt with staggering heat while picking cotton in the summer, and bone chilling winters huddled up to the family radio in the drafty unpainted house. One of his earliest memories was of German POWs from a nearby prison camp helping the farmers in their fields towards the end of WWII. After the war the abandoned military base acted as a place for adventures with his cousin. Bill attended the local schools and graduated from Wiley High School where he played baseball and football. He fondly remembered being anxious about playing against a rival school that included future Hall of Famer, Bob Lilly. After graduation, Bill enlisted in the Navy where he served on the aircraft carrier USS Princeton. During his service he completed Pacific tours to Asia where his favorite port was Singapore. During his time in the Navy, he served in the ship Post Office, was the Boxing Champion and enjoyed shore time with shipmate and future singer/songwriter/actor, Hoyt Axton. After his service, Bill returned to Texas where he worked for some time at Rocketdyne’s MacGregor Facility before landing a position with the Santa Fe Railroad. It was on a trip to Santa Fe’s Training Facility in Kansas City that he met Kay Cameron. They were married and the newly wedded couple along with Kay’s boys, James and Steve, packed up their belongings and moved to San Saba, Texas. It was there that Bill’s first child, Daniel, was born. Shortly after Daniel’s birth, like so many Texans of his generation, his family left rural Texas and moved to Pasadena, Texas so that Bill could be closer to home while working for the Port Terminal Railroad along the Houston Ship Channel. During the next couple of years, daughters Rebecca (Becky) and Christain (Christy) were born. Bill’s final job change was to become an operator at the Diamond Shamrock Chemical Refinery, later to become Occidental, in Deer Park, Texas where he was a shift worker for the rest of his professional career. During this time, the family moved to Genoa located in southeast Houston. Never one for laziness, Bill kept a vegetable garden in the backyard, painted houses and drove a dump truck on the side. He was a staunch Reagan/Trump Republican. As the children became old enough for youth sports, he spent countless hours coaching little league baseball, youth league football, little league softball and youth girls’ basketball. He even started a youth football organization in an underserved community. As his children became too old to coach, he became very involved in officiating youth sports. Starting as a little league umpire, he would eventually officiate high school baseball, basketball, football and volleyball. He was an important part of the officiating community, acting as the longtime sub-varsity scheduler for several sports. In 2018, he was honored by the Texas Association of Sports Officials in Houston for a lifetime of dedicated service. Once he aged out of being able to keep up with the high schoolers, he learned how to officiate tennis. Although he never had a large travel budget, he managed to take his children to the newly opened Walt Disney World in 1972 in a Ford Pinto Station Wagon while pulling a tiny, borrowed pop-up camper. The family spent many annual camping trips at Texas State Parks and went on several camping trips to Colorado. He enjoyed taking his family to all the important tourist locations in the state, with a focus on Texas History. He later was able to travel to Hawaii with his wife and daughters. He retired from the refinery in 1994 and moved one last time to League City, Texas to be closer to his grandchildren, Cody and Conner, whom he spoiled and helped coach in little league baseball. He was a hero in their eyes. He was a volunteer at Clear Creek Community Church and was respected by his friends as a quiet, gentle giant. Bill was preceded to heaven by his parents A.J. and Christine, his sister Bobbie Louise Jeffrey and her husband John Jeffrey, his sister Patsy (Pat) Griffin and her husband Robert (Bob) Griffin and son Joe Griffin, as well as his stepson James and his beloved daughter Rebecca (Becky). He is survived by his wife Kay Brewster, stepson Steve, daughter Christain (Christy), son Daniel (Danny) and his wife Tammy, grandson Conner, grandson Cody and his wife Carissa and his great-granddaughter Rebecca. He is also survived by his nephew Bruce Griffin and his wife Diane and their children, Brad and Sarah, nephew Mark Griffin and his wife Carol and their sons, Jacob and Ben, niece Gay and her husband Paul Garrett and her daughters, Elise and and Laura Leigh, and nephew John Jeffrey, Jr. and his wife Kim and their son, Travis. The family will have a private interment at South Park Cemetery. A celebration of Bill’s life will be held at 2:00 pm on Saturday, April 10, 2021 at the Clear Lake Campus of Clear Creek Community Church. In a effort to love our neighbors well, help contain the spread of COVID-19, and do our best to create a safe worshipful environment the family asks that you assess your health before you make the decision to attend. Masks will be required at all times while inside the church during the service. Clear Creek Community Church. www.clearcreek.org. 16743 Diana Ln Houston, TX 77062 Central #: 281-338-5433.

William (Bill) T. Brewster went to Heaven on March 30, 2021 due to complications from pneumonia; he also battled heart and kidney issues for the last two years. Our prayers are that he is now beyond suffering and with his Savior. Bill was born... View Obituary & Service Information

The family of William T. Brewster created this Life Tributes page to make it easy to share your memories.

Send flowers to the Brewster family.