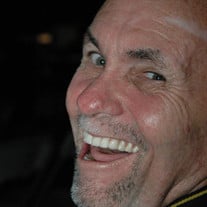 Vic Edward Thomas, Jr., 71, of Lago Vista, TX entered into rest on January 14, 2021, in Cedar Park, TX. Vic was born in Beaumont, TX to Vic and Irma Thomas on December 10, 1949. He was a 1969 graduate of New Caney High School where he lettered in track, played the coronet in the marching band, where Vic competed at the state level in both. In 1968, Vic married Debra Kay Asberry and they had two children together. Vic joined and served as a Pvt in the US Army from 70-71 during the Vietnam War. He was stationed at Ft. Polk, LA for the majority of his service. He was a flag waving, patriotic man his entire life. Vic did various jobs as a young man. At the age of 10 he would ride his bike on the main streets of Houston and shined shoes. He mowed lawns, washed dishes, roofed houses, drove an 18-wheeler, a machinist for GE and an office manager for a local auto parts distribution center. While working full time and raising a family in Pearland, TX he went to night school at Alvin Community College where he received his Associates Degree. In 1981, Vic met his soulmate Dottie on the dance floor and they married in 1983. He instantly became father to her two children and the two of them adopted their son, Aaron, some years later. Vic worked for Sysco Foods from 1983-1996 as a truck driver, marketing rep, and where he found his niche in life, SALESMAN! Vic was a fun loving funny man with a smile always on his face, and a joke to tell. He loved people and they loved him. He worked in the food industry until 2001 when he and “Dot” began a new chapter in their life together as youth sports photographers. They enjoyed working together for 10 years side by side. Dancing every chance they had. At the age of 59, Vic was diagnosed with Alzheimer’s disease, but he refused to let it “put a cramp in his style”! For almost eight years most people he knew did not realize that he had it. He knew he couldn’t fight it, but chose to ignore it. The last three years took a toll, but he never lost his sense of humor or the desire to dance. He and Dot danced for 40 years. Vic is preceded in death by his father Vic Edward Thomas Sr., his mother Irma Rae Thomas, brothers - Sidney Thomas, Charles Thomas, Bobby Simpson and Wayne Thomas, and sisters - Dorothy Thomas, Eula Rae Olson, Carmen Laree Teague, Nelda Faye Simpson, Sally Knox, Brenda Hoelscher, and Sylvia Nelson. He is survived by his wife Dorothy “Dot” Thomas, brother David Simpson, four sons - Stephen (Ike) Coronis and wife Michele, Aaron Thomas, Vic (Skip) Thomas III, Joshua Belyeu, two daughters - Lori Hewitt, Juanita Pugh and husband Eddie, 10 grandchildren - Jack Hewitt, Twyla Jones and husband Sawyer, Ozzy Thomas, Alex Thomas, Allyn Hewitt, Lane Coronis, Corbin Hewitt, Dustin Sims, Xander Coronis and Jett Coronis. Great-grandchildren Stetson and Shylah. Also, many nieces and nephews. A Celebration of Life for Vic will be held Friday, January 22, 2021 at 2:00pm at South Park Funeral Home in Pearland, TX. Vic loved to fly his flags and loved his Houston Texans, so to honor him we ask that everyone wear red, white, or blue or all three or Houston Texan attire... and blue jeans! Due to Covid-19 protocol, all visitors must wear a mask and must have their temperatures taken on arrival. Donations may be made online in lieu of flowers to the Alzheimer’s Association Houston. If you are unable to be present for the service please join us by following the link: http://webcast.funeralvue.com/events/viewer/45672

The family of Vic Edward Thomas Jr. created this Life Tributes page to make it easy to share your memories.

Send flowers to the Thomas family.