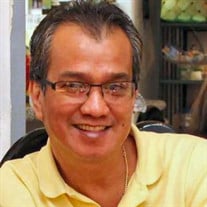 Rolando Sembrano Jocson, Sr., 66, of Houston, Texas, passed away on March 2, 2022. The funeral service will be held at 12:00 pm on March 14, 2022 at St. Albert of Trapani Catholic Church. Fr. Vincent Tran of St. Albert of Trapani will be officiating. Visitation will be held at 5:00 pm on March 13, 2022 at South Park Funeral Home. Burial will immediately follow the funeral at South Park Cemetery. Funeral arrangements are being handled by South Park Funeral Home and Cemetery. Rolando was born in Tondo, Manila, Philippines on August 21, 1955. He graduated from Philippine Maritime Institute in 1975 and rose to the rank of third mate. Rolando was married to Cynthia Garcia Jocson on March 19, 1988; they were married for 22 years prior to Cynthia’s passing in 2010. Prior to moving to the United States, Rolando worked as a third mate on merchant ships. He then moved to the United States with his family in 1992. Rolando then worked as a ramp agent for Continental/United Airlines for 21 years. He enjoyed telling jokes, reminiscing about his time as a seaman, singing, dancing, playing/watching billiards, spending time with family and friends, and eating at Chinese buffets. He was also actively involved in the Filipino Ministry at St. Albert of Trapani Catholic Church. Rolando is survived by Ramil Joey Jocson, Rolando Jocson, Jr., Roland Christopher Jocson, Riqueben John Jocson, Gigi Dela Vega, Geraldine Dela Vega Launico, Ghinalyn Dela Vega, Niña Jocson Muñoz, and other family and friends. Rolando is preceded in death by Cynthia Garcia Jocson, Ramon Jocson, Enriqueta Jocson, Wilfredo Jocson, Virginia Dela Vega, and Mario Jocson. In lieu of flowers memorial donations may be given to Rolando Jocson, Jr. at 12402 Settle Dr, Houston, TX 77071. If you are unable to join us for services please follow the link provided:http://webcast.funeralvue.com/events/viewer/70526/hash:5A8CF90BB0C06AF4

The family of Rolando Sembrano Jocson Sr. created this Life Tributes page to make it easy to share your memories.

Send flowers to the Jocson family.