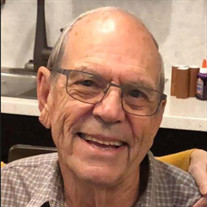 Robert (Bob) Charles Solomon, formerly of Livingston, Texas, passed away peacefully in League City, Texas on January 13, 2022, at the age of 90. He had been battling Alzheimer’s for the last 15 years. He was born on February 16, 1931 in West Texas. He is preceded in death by his wife: Nancy (Nan) Lee Solomon, parents: Vernon & Luvina Solomon, brother: Bill Solomon, and sister: Doris Roberts. Bob met Nan in Odessa, TX while he was on leave from the Army during the Korean war. After he was discharged, they married in 1952 and soon had three little girls. Bob was an Eagle Scout who was blessed with daughters. He gladly carried on his scouting traditions by leading their Girl Scout troops. Bob graduated from Texas Tech University in 1960 with a degree in Electrical Engineering and soon moved to the Houston area. He worked for many years with Southwestern Bell, Philco-Ford, Ford Aerospace, and Lockheed Martin. His career allowed him to work on some historical masterpieces: He engineered the phone system in the Astrodome when it was first built and later his team developed the communications system used by the NASA space shuttle. “Hello Houston!” He also helped build the original NASA Mission Control Room. Bob had an expensive smoker in his backyard that he built out of the consoles left over from Mission Control. In his free time, Bob loved to dabble in the kitchen after cutting recipes from the Houston Chronicle. He happily tortured his family with beer beans, sweet potato biscuits and his infamous huevos rancheros (which he eventually perfected). His homemade eggnog has become a family Christmas tradition! Bob (known lovingly as Papa) regularly spoiled his grandkids with Super Duper, Whopper Stopper, Yum-Yum, Goodie Flap Jacks on any given weekend before taking them garage saleing. . Bob’s second love was fishing, and he regularly spent his weekends at Lake Livingston where he later moved after retiring. When not out on the lake, Bob could be found in his workshop tinkering or on his deck feeding his pet squirrels. In his workshop, he designed and developed: new types of fishing gear, can crushers, and created wooden toys and gifts for his daughters and grandkids. Bob was well known for consistently humming (off tune) while he worked at his latest invention. His favorite holiday was July 4th when he would host his annual fish-fry and invite the family to come to the lake. He spent the holiday with early-morning fishing trips, afternoons pulling the kids on the ski-bob behind his trusty pontoon boat and ending the day with a boat-trip to the middle of the lake to watch fireworks. Bob embodied the quote by William Yeats: “There are no strangers, only friends you have not met yet”. There wasn’t a single soul Bob couldn’t talk to. A normal 10-minute trip to the hardware store would result in a 3-hour adventure with new friends. He impacted everyone he met, and the world is better for it. He will be greatly missed! Bob is survived by his daughters: Sherry Byrnes, Becky Danos, Kathy Solomon, grandchildren: Mike, Christina, Tiffany, Patricia, and Megan as well as numerous nieces, nephews, and great-grandchildren. The family requests, that in lieu of flowers, contributions should be made to the Alzheimer’s Association on Bob’s behalf. We hope someday this horrible disease will be defeated.

Robert (Bob) Charles Solomon, formerly of Livingston, Texas, passed away peacefully in League City, Texas on January 13, 2022, at the age of 90. He had been battling Alzheimer&#8217;s for the last 15 years. He was born on February 16, 1931... View Obituary & Service Information

The family of Robert "Bob" Charles Solomon created this Life Tributes page to make it easy to share your memories.

Send flowers to the Solomon family.