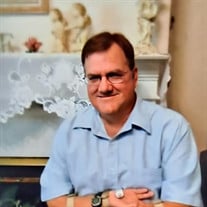 Michael James Pesl was called home to our Lord on May 6th, 2022 after battling his final struggle. He was born on June 21, 1962 in Long Beach California with little hope of survival. He is survived by his parents Rudolph James Pesl Sr. (Rudy) and Sylvia Budge Pesl of Pearland, his sister Jennifer Pesl Hoot, and his brother and wife of Colorado, Jim and Brenda Pesl. He is also survived by his niece Ashley Pesl and her daughter Ryleigh along with numerous aunts, uncles, cousins and friends. He earned many titles going in and out of hospitals and doctor’s offices since his birth. Miracle boy, man of 29 lives, and amongst those who knew him best, a warrior. Despite being born with a hole in his heart at birth, and losing much of the function in his limbs, he accomplished far more than anyone had expected in his near 60 years of life. He was a master’s graduate of University of Houston, a teacher of history, disc jockey and an author. His passions in life were many and varied. Chief among these was his love of history, music, and teaching. He taught at Mt. Carmel High School and Ed White High School during his career. While he left no children of his own behind, he touched many lives from sharing his love of learning during his years as a teacher. He was known to family and friends as buffalo butt, lizard lips, bunny, bugsy, round man, and even old man towards the end. He’d lived a full life despite his numerous illnesses that kept him fighting for his life, and one lacking in regret. This world is a dimmer place without him, but the heavens have been given a new star. If you are unable to join us for the rosary please click on the link: http://webcast.funeralvue.com/events/viewer/73617/hash:1577D866A8D8CE1E

Michael James Pesl was called home to our Lord on May 6th, 2022 after battling his final struggle. He was born on June 21, 1962 in Long Beach California with little hope of survival. He is survived by his parents Rudolph James Pesl Sr. (Rudy)... View Obituary & Service Information

The family of Michael James Pesl created this Life Tributes page to make it easy to share your memories.

Send flowers to the Pesl family.