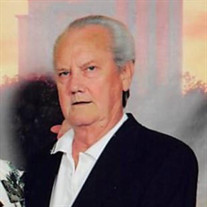 Michael Eugene Foster ("Mike"), age 84, Clear Lake, Texas, passed away on March 30, 2022 in Clear Lake, Texas surrounded by his loved ones. The funeral service will be held at 2:00 pm on Thursday, April 7, 2022 at South Park Funeral Home, 1310 N. Main Street, Pearland, Texas 77581.Pastor Randy Fowler of Broadway Baptist Church will be officiating. Visitation will be held at 1:00 pm on April 7th at South Park Funeral Home. Burial will follow the funeral services at the South Park Cemetery. Mike was born in Brownwood, Texas on January 31, 1938. He graduated from Milby High School and attended Sam Houston College for two years and went on to receive an undergraduate degree from the University of Houston. Mike was married to Phyllis Carlene Foster on January 11, 1957; they were married 65 years. Mike worked for Shell after he graduated for 5 years then joined Baroid Drilling. In 1963 he formed and was partner/President of Spectrochemical Research Laboratories ("SCR"). He had many talents and was co-owner of Cornerstone Restaurant and was also a Texas Licensed Real Estate Broker. Mike was an Eagle Scout. He enjoyed outdoor sports such as boating, fishing and hunting. Among his greatest joys were his daughter Becky who was the light of his life and his grandchildren and great grandchildren. Mike is survived by his wife, Phyllis Foster, daughter, Rebecca Parker and husband, Michael Parker, Sr., his grandchildren, Michael Parker, Jr. and wife Kelli and their children Reese, Cole and Lane, and Douglas Foster Parker and fiance Sarah and daughter Claire. Nieces, Patricia ("Tish") Williams and Deanna Holladay. Nephew Dennis Foster. And numerous family and friends. Mike is proceeded in death by his parents, Melba Ruth and Ralph Otis Foster, sister Yvonne Hart and husband Leslie Hart, brother, Jerry R. Foster, father-in-law, James C. Baker, mother-in-law, Fern Baker Davenport and other close family members. In lieu of flowers memorial donations may be given to St. Jude's Children's Research Hospital or Tunnel to Towers Foundation.

The family of Michael Eugene Foster created this Life Tributes page to make it easy to share your memories.

Send flowers to the Foster family.