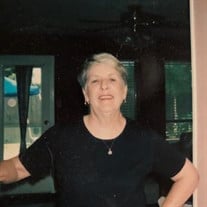 Margaret Ann Dunn Lisano was born March 23, 1940 to Cleatus Faye Dunn and Annie Mathews Dunn. Preceded in death by her husband John “jack”Lisano Survived by daughter Kelly Shinneman and husband Darrel Daughter Amy Bedford and David. Grandsons Cory Bedford, Dylan Dingle, Justin Bedford, Dalton Dingle, and Coltin Bedford Sister Sylvia Barnes , sister in law Gloria Craib Numerous nieces and nephews. Margaret was born in Houston, Texas, graduated from Milby High School in 1958. She was a mom, a mimi, which was her favorite, a sister, an aunt, and a great friend to many people. She started her law enforcement career at the Houston Police Department, where she met the love of her life, Jack, which they were married 37 years until his passing. They had moved to Pasadena, Texas after they started a family and then preceded to move to Deer Park, Texas, to which she resided until her death. Margaret went thru the Pasadena Police Academy in 1972 and preceded to have a 28 year career in law enforcement, which ended in 1997 when she retired from the Harris County District Attorney’s Office. Jack and her had race horses for many years, a farm in Buna, Texas , and she loved to go gambling.

The family of Margaret Ann Lisano created this Life Tributes page to make it easy to share your memories.

Send flowers to the Lisano family.