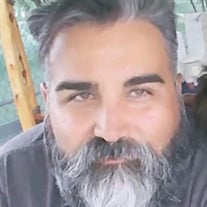 Manuel Chapa III passed away at the age of 50 on Saturday, April 24, 2021. He attended Catholic and public schools in Laredo and Edinburg, Texas graduating from Edinburg High School. He attended St. Edward’s University in Austin, TX while working his way up to a Store Manager for Hi-Lo Auto Parts. After dating five years, he married Lamar Garcia on February 14, 1998 at St. Pius X Catholic Church in Weslaco, TX and was a very caring and loving husband to her for 23 years. Manuel is survived by his wife Lamar, his father Manuel Chapa, Jr. and sister Diana Alexandra Chapa. He is also survived by his father and mother-in -law Homero and Gloria Champion Garcia, sisters-in-law Clarissa Garcia Ramirez (Arnold), Sandra Garcia Alaniz (Luis), and five nieces and nephews. Manuel was a godfather to Alexa Ramirez (niece) and Marcelino Alaniz (nephew), and a pet parent to his fur babies “Coco” and “Mr. Big.” He is preceded in death by his mother Diana H. Rodriguez Chapa, his grandparents, Manuel Chapa Sr. and Marianela V. Chapa, Leopoldo G. Rodriguez and Herminia D. Rodriguez, along with several aunts and uncles whom he loved dearly. Manuel was competitive by nature, and it began while playing soccer and golf in his youth and then he started competing with the 4-H Club, FFA and continued to grow throughout his adult life receiving various awards and recognitions. Manuel also had an entrepreneurial spirit and was very tech savvy. His passion for the outdoors influenced his career choices as well, which included working on off-site platforms as a corrosion specialist across the world, an independent distributor with Mac Tools and a Field Technician for the oil and gas industry. Manuel was also passionate about working in the RV industry - selling, transporting and facilitating assistance for FEMA during Hurricanes Harvey and Katrina. Manuel loved to share his expertise with others, and it developed into a successful YouTube Channel called “Manny-Life of an RV Transporter.” Manuel was an avid sportsman and loved the great outdoors – he loved hunting, fishing, and traveling, riding motorcycles, boats and RV’s, going on cruises, gambling trips, and he continued to live life to the fullest, even while battling cancer for the last 10 months. Manuel touched many lives, and he was always willing to lend a helping hand. He valued his great friendships, and he will truly be missed. Manuel was a true fighter and fought until the very end. We would like to extend a heartfelt appreciation from our family to all the doctors, specialists, nurses and staff who cared for Manuel at MD Anderson Cancer Center, Memorial Hermann Southeast in Houston, TX and St. Luke’s Patients Medical Center in Pasadena, TX where he passed away peacefully surrounded by his immediate family. On behalf of the Chapa and Garcia families, we appreciate everyone who has reached out to us with prayers, gifts, and support during these difficult times. A Funeral Mass will take place at 3:00 pm on Saturday, May 15th, 2021 at St. Pius V Catholic Church in Pasadena, TX and will be officiated by Reverend Joe Doran. Burial will follow at Highland Memorial Park Cemetery in Weslaco, TX at a later date.

Manuel Chapa III passed away at the age of 50 on Saturday, April 24, 2021. He attended Catholic and public schools in Laredo and Edinburg, Texas graduating from Edinburg High School. He attended St. Edward&#8217;s University in Austin, TX while... View Obituary & Service Information

The family of Manuel Chapa created this Life Tributes page to make it easy to share your memories.

Manuel Chapa III passed away at the age of 50 on Saturday, April...

Send flowers to the Chapa family.