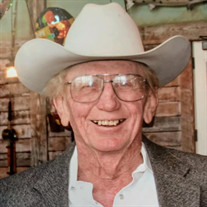 Ladislav Julius Petru, 84, of Manvel Texas, “Laddie” to friends and family, was born March 7, 1938 in Raymondville, Texas. Laddie was called to his Lord and Savior on the morning of March 17, 2022. As a loyal parishioner of Sacred Heart of Jesus Catholic Church in Iowa Colony for over 45 years, he spent many years as a leader/volunteer for the annual Bazaar. Spending countless hours barbecuing, being the self proclaimed pitmaster in his later years to help ensure the success of many church events. He often volunteered his barbecuing prowess to cater multiple weddings and family reunions. For many years after spending multiple hours of the day and night cooking for the Bazaar, Laddie would switch hats and Auctioneer the bazaar often selling more than 500 items to raise money for Sacred Heart. He volunteered his auctioneering talents on multiple occasions to benefit many other charities and fundraisers around the state. As a lifelong member and past President of The Knights of Columbus Manvel Chapter, Laddie spent much of his time volunteering for the many of the various outreach programs within the organization. Before his retirement from the Veterans Administration Real Estate Department, Laddie made his mark as a residential and commercial builder. Prior to that, he and his brothers and sister owned and operated a successful feed and tack store, “Capsons”, where he made many lifelong friends. His true passion was taking care of his many cows, occasional donkeys and time in the seat of his many tractors. In his spare time, he loved hunting on various leases around the state, finally purchasing his own place in 2004. The June Ranch, named for his wife, was a place he spent many hours around the campfire with family and friends and a few beverages. He was preceded in death by his wife, June Barnhill Petru, his parents Charles Sr. and Haddie Mokry Petru, and his brother Clem Petru. He is survived by his son Ron Petru and wife Christy, Dee Dee Schmeisser and husband Michael; Grandchildren, Joshua Petru, Max Petru and wife Samantha, Lea Schmeisser, Colby Schmeisser, Nathan Petru, Jaxon Schmeisser, Emma Petru and Elizabeth Petru. Great-Grandchildren, Zoey, Clayton, Weston, Austin, Ethan, Maverick and Penelope Petru. He is also survived by his siblings and their spouses, Ben and Lois Petru; Charles, Jr. and Vera Petru; Dorothy Perry; Edward and Dorothy Petru; Larry and Brenda Petru; sister-in-law, Wilma Satterfield & brother-in-law, Hugh Barnhill. He has so many loving cousins, nieces and nephews, dear friends and a few “Partners in Crime” In Lieu of Flowers, donations may be made to the Liberty Hill Livestock Association or Sacred Heart Catholic Church, Manvel TX

The family of Ladislav Julius (Laddie) Petru created this Life Tributes page to make it easy to share your memories.

Send flowers to the Petru family.