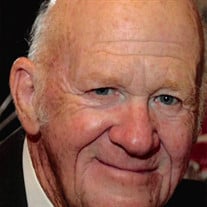 Jacob “Red” Tremont Jacob “Red” Tremont, 91, of Houston, TX passed away peacefully on March 7, 2021. Red was born on March 11, 1929 in Beaumont, TX to Tony and Mary “Mozell” Tremont. He joined the army in 1950 and was honorably discharged in 1952. He then moved to Detroit, MI where he met his wife Beverly. Red and Beverly moved back to Texas and settled in Houston. Red worked as a pressman for the Houston Post and Gulf Coast Publishing until his retirement in 1994. After retirement Red and Beverly moved to Crystal Beach, TX and lived there for 10 years. After Hurricane Ike they moved back to Houston, TX to be near family. Red is preceded in death by his parents; his sister Mary Landrum; his twin brother James “Jimmy” Tremont; and his beloved dog Maggie. He is survived by his wife of 65 years Beverly Tremont; sons, David Tremont and his wife Marsha; Barry Tremont and his wife Donna; daughter, Judy Neal and her husband Terry; grandchildren, Christy Ankrom and her husband Ray; Brian Tremont and his wife Jill; Jamie Baron and her husband James; Matthew Tremont and his wife Jennifer; Chad Tremont and his wife Jackie; Sarah Tremont and her fiancé Sam Ward; Step-granddaughter Marissa Ramirez and her fiancé Justin Marr; 11 great grandchildren Laney, Jacey, Audrey, Cadel, Claire, Lauren, Lex, Jake, Zachary, Luke and Jackson. Also survived by his brothers Lenard Tremont; AJ Tremont and his wife Sandy; and numerous nieces and nephews. Services for Red will be held at 2pm on Monday, March 22, 2021 at South Park Funeral Home in Pearland, Texas. In lieu of flowers the family requests donations made to: Houston Humane Society, in his name. TO access LIVESTREAM, please click link below: http://webcast.funeralvue.com/events/viewer/50031

The family of Jacob "Red" Tremont created this Life Tributes page to make it easy to share your memories.

Send flowers to the Tremont family.