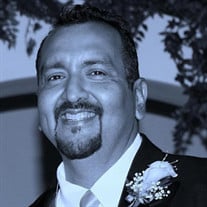 Isai “Jesse” R. Valle Heaven has received a new member to its musical team. Isai “Jesse” R. Valle went to be with the Lord on Thursday, October 29, 2020. Isai was a loving son, brother, uncle, friend, co-worker, and church brethren. Jesse was born February 28, 1967 in Aurora, Illinois to Ismael Sr. and Noemi Valle. He was the youngest of the Valle siblings, everyone always looked out after him. The family lived in Aurora where Jesse attended elementary and Jr High, until they moved to Houston, where he attended and graduated from Milby High School. He also attended Jimmy Swaggart Bible College in Louisiana, where he gained a larger knowledge of the Bible and his musical talent. Jesse learned to play the guitar and piano from the pastor’s sons at La Hermosa Church in South Houston. He used his musical talent to minister in various churches, lastly at Sendero de la Cruz Christian Church. He loved to play the guitar whenever and wherever he could, even building many guitars himself. His one desire was to be able to teach his great nephews how to play. Jesse was a reliable and dependable worker, always available when needed. He worked for several companies. From McDonalds to Aqua-Dyne, UH Clear Lake, the US Post Office, and lastly with SecurAmerica. Jesse is preceded in death by his parents Ismael Sr. and Noemi Valle. He is survived by his siblings; Ismael Valle Jr. (Bonnie), Dora Contreras (Javier), Isaac Valle (Rafaela), Diana Valle, Dalia Valle, and Delia Maldonado (Armando). Nieces and nephews; Xavier Contreras (Rosa), Stephanie King (Shelby), Dr. Alejandro Contreras (Dr. Adriana Visbal), Doraliza Bard (John), Diana Gayton, Veronica Valle, Adriana Rodriguez (Jared), Isaac Abel Valle (Martha), and Felicia Valle. Great nieces and nephews; Xavier Contreras Jr., Ayden King, Gabriel Contreras, Isabella Gayton, Carleigh King, Leonardo Contreras, Sofia Bard, Alexander Bard, Madalyn Valle, Santiago Contreras, Iliana Valle, Victoria Contreras, Victoria Valle, Jared Rodriguez Jr., and Jax Rodriguez. Jesse will be laid to rest at SouthPark Cemetery in Pearland, Texas alongside his parents. The Valle Family would like to thank everyone for their continued thoughts and prayers. Please take in consideration that the family requests no children under the age of 10 years old. And the maximum capacity for the services are 90 people. The cemetery is open for all to come but must wear a mask. If you are unable to join the family for services please follow this link provided to watch, http://webcast.funeralvue.com/events/viewer/39940

The family of Isai R Valle created this Life Tributes page to make it easy to share your memories.

Heaven has received a new member to its...

Send flowers to the Valle family.