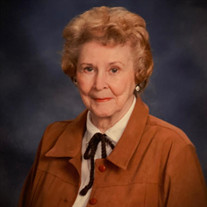 Gertrude Ann "Tommie" Thomson Gray, age 99, died on November 4, 2020. She was born in Scott, Saskatchewan, Canada on August 18, 1921, to Gertrude Winona Letitia Cavanagh and Albert Warren Thomson. She lived on a wheat farm; her father was a railroad engineer. When Tommie was six, the family moved to Chicago. In 1942, she graduated from Augustana School of Nursing, Chicago, and worked as an ICU registered nurse in a Chicago hospital. One evening, Tommie and her friend Dottie went to the Palmer Hotel where Woody Herman was playing. Two guys sat down. Lloyd Frank Gray sat beside Dottie; his friend, beside Tommie. They walked to the Latin Quarter. By the end of the night, Tommie and Lloyd were walking together, two souls that matched. Tommie and Lloyd were married on May 24, 1942. An American Airlines pilot, Lloyd was in the Air Transport Command, flying DC-3s across the Atlantic. They lived in New York City where Tommie continued her nursing career. Over the years, Tommie and Lloyd moved to Memphis, St. Louis and Houston as he pursued his aviation career and they reared three children. In the 1960s, Tommie provided Red Cross training for volunteers working back stage at the Houston Symphony. In the 1970s and 1980s, she and her sister Ethel built an antiques business, specializing in quilts, tableware and dolls. After Lloyd's retirement, they moved to The Woodlands. They were active members of The Woodlands Community Presbyterian Church. Devoted to her grandchildren, a reliable volunteer at church or her children's school, she was their treasured "Mimi." To her nieces and nephews, she was "Auntie Gay". Tommie was the type of grandmother who would play whatever role her grandchildren assigned: student, teacher, pet store owner or veterinarian. She also played a ruthless hand of gin rummy, no quarter given for age. Tommie was pre-deceased by her parents; her husband of 48 years, Lloyd Frank Gray; daughter, Susan Carolyn Gray Goodwin; grandson Spencer Lloyd Gray. and sister Ethel Marian Thomson Thoresen Cummings. She is survived by her son Lloyd Douglas Gray, daughter-in-law Sara Ann McDaniel, son Brian David Gray and daughter-in-law Gina Gayle Osborn Gray. Survivors include grandchildren Charles Wayne Goodwin, Eric Gray Goodwin and granddaughter-in-law Leigh Ann Kowalsky-Goodwin, Douglas Davies McDaniel Gray, Alexis Dyan Gray, Emma Marie McDaniel Gray, assorted nieces, nephews and beloved friends. In observance of COVID19 precautions, no memorial service will be held. Visitation will be from 5 to 7 p.m., Thursday, November 12 at South Park Funeral Home, 1310 N. Main, Pearland, Texas 77581. The family will gather for a private interment in South Park Cemetery. Memorial contributions may be sent to the Texas Lions Camp, 4100 San Antonio Highway, Kerrville, Texas 78028 or to the charity of your choice.

Gertrude Ann "Tommie" Thomson Gray, age 99, died on November 4, 2020. She was born in Scott, Saskatchewan, Canada on August 18, 1921, to Gertrude Winona Letitia Cavanagh and Albert Warren Thomson. She lived on a wheat farm; her father was a... View Obituary & Service Information

The family of Gertrude Ann Gray created this Life Tributes page to make it easy to share your memories.

Send flowers to the Gray family.