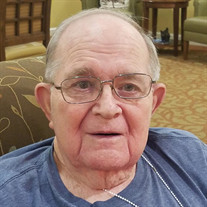 Longtime South Belt resident Edwin R. Beeker, Jr, 83, of Houston, Texas passed away on Monday, December 7, 2020 at 9:57pm. (??) Ed was born in Oakwood Texas on February 21, 1937 to parents Edwin R. Beeker and Lena Mae Connell Beeker. He is preceded in death by his parents, wife Beth Janelle Beeker, daughter Carrie Lynn Beeker, sister Ella Brunelle Bell, brother-in-law Clifford Issic Bell, niece Paula Bell, and nephew Chad Bilbrey. He is survived by daughters Kimberly Beeker Street and husband Aaron of Pearland, Susan Beeker Vance and husband Mike of Pearland, grandchildren Cameron Vance, Lainey Vance, and Collin Vance of Pearland, sister-in-law Neva Bilbrey and husband Gene of Arlington, nephew Jay Bilbrey of Burleson and several great nieces and a great nephew. Ed resided in the South Belt area for more than 55 years. He served in the Air Force early in his career and then went to work in the IT department for Texaco from which he retired in 1994. He was a devoted family man who adored his grandchildren. He enjoyed hunting, fishing, football, and most importantly spending time with his family. Once his grandchildren came along, he could be found regularly at baseball practice, dance recitals and baseball games. Up until the last 4 years, he never missed a game or recital. Devoted husband and family man. Special thanks go to Heyam Mullican and Lynn Oliver for the friendship and care that they have provided over the years. In lieu of flowers please donate to your favorite charity in honor of Edwin Beeker Jr.

The family of Edwin R Beeker Jr created this Life Tributes page to make it easy to share your memories.

Send flowers to the Beeker family.