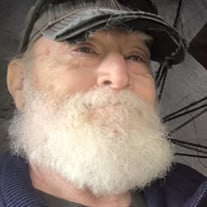 Dennis James Balko went to be with the Lord on August 18, 2021, at the age of 62. He passed with his children at his side, after a battle with cancer. January 8th, 1959, Dennis James Balko was born at Herman Hospital, in Houston Texas. He was the 4th of 6 children to the late Milton and Mildred Balko. As a teenager he accepted Christ. He loved God and this beautiful place God granted us. Dennis lived a sober and quite life in the very house that his parents brought him home to after being born. Growing up, Dennis was all about having fun. He enjoyed riding go fast mini bikes, then progressed to motorcycles, and later cars. He loved the water. Pastimes included surfing in Galveston in hurricane season and a lot of fishing in the bay. Dennis attended South Houston High School. He graduated early from Pasadena Night School to pursue his life long career as an auto repair technician. He specialized in transmission service, but would do any auto work set before him by a friend or customer. He serviced his friends and local community from his place of business, UrTech Automotive, for more than 35 years in South Houston. His customers will truly miss his honest and loyal services that he provided to them. In his early 20’s he was briefly married and had a daughter; Jessica and a son; Joel. He loved his children and grandchildren deeply. He enjoyed times teaching the grandkids the art of fishing and how to gut and clean a fish. Dennis loved people. Nearly anyone who would meet him could tell of his outgoing, friendly disposition. No one was a stranger. He could strike up a conversation with anyone. He also loved nature and spending time outdoors. He could frequently be caught photographing wildlife, especially birds. Dennis is survived by his two children Jessica Branch (Berton Branch) and Joel Balko, 5 grandchildren Jonathan Branch, Caleb Branch, Naylene Branch, Landon Branch, and Austin Balko. He has also left behind 5 siblings, Steven Balko (Irma Balko), Theresa Feeney (Jim Feeney), Doug Balko (Jimmie Sue Balko), Jerry Balko (Carole Balko), and Jenise Hildebrand (Gene Hildebrand) and many cousins, nieces and nephews. He is already missed deeply by so many. Now we can be happy for him, he’s no longer suffering. We celebrate that he’s joined his parents and so many others with our Father in heaven. If you cannot join us at the funeral home for the service, you can join us online by clicking on the following link;http://webcast.funeralvue.com/events/viewer/59635/hash:815BDCB0E924424D

Dennis James Balko went to be with the Lord on August 18, 2021, at the age of 62. He passed with his children at his side, after a battle with cancer. January 8th, 1959, Dennis James Balko was born at Herman Hospital, in Houston Texas. He... View Obituary & Service Information

The family of Dennis James Balko created this Life Tributes page to make it easy to share your memories.

Send flowers to the Balko family.