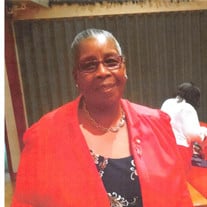 Darelene Casalena Handy Morris, peacefully departed her life in this world on July 10th, 2021, in the afternoon hours at her home in Pearland, Texas. She was the daughter of the late William and Luvenia Johnson and the first of fourteen children. For the first nine years of her life, she lived with her aunt in Philadelphia, Pennsylvania, where she started her early education being taught in the Catholic religion. After moving to Maryland to live with her parents, she received her remaining education in the Somerset County school System, where she started attending Saint Andrews Methodist Church, where she learned still more of God’s way, yet not yet completing her hunger for him. She was joined in marriage to Rayfield Handy, and from their union they were blessed with six children. Sharlene Hoskins (Deceased), Meta Handy, Rayfield Handy (Deceased), Terry Handy (Deceased), Marshall Handy, and Hope Handy. After the death of her husband Rayfield, she began raising her six children in the fear of the Lord Jesus Christ, you see she was finally fulfilled with the knowledge of Jesus, being born again and being baptized in his name under the leadership of her then Pastor: Pastor C.P. Wilson, and first lady Sister Catherine Wilson. Where they formed Non- Denominational Fellowship Center Church, she being one of the first members. Before being converted, Darelene was plain spoken and a fighter, after her conversion, she fought hard for the Lord Jesus as a Sunday School teacher and strictly enforcing the word to win souls into the kingdom of the Lord. Years of raising her children alone, she met and married Ernest Morris, where she again enjoyed life as being a wife. He was soon converted and received the baptism of the Holy Ghost, and not many years later God called him, and the First Lady Catherine Wilson home to eternity. The Lord led her Pastor to move the ministry to Texas and of course she was moving with the ministry, after all she was one of the founding members! The name of the church was changed to Word Fellowship Christian Church where she held the office of treasurer, announcer, and the reading of scriptures every Sunday until Jesus call her home. She could always be heard saying “It’s the Little things… It’s the little things…” that matters! Her favorite scripture was Ephesians 3:20, “Now unto him that is able to do exceeding, abundantly above all that we ask or think, according to the power that worketh in us.” Her favorite food was Fish or Popeye’s Chicken and Greens! She leaves to mourn her passing, two daughters, Meta Handy and Hope Handy (Robert), and one son, Marshall Handy (Cindy). Her best friend for many years, Florestine Johnson who she called (Flo). Her Pastor: Regina Wilson, and church family. Seven remaining siblings, William C. Johnson, Sr., Samuel Johnson (Ann), Hallis Johnson(Nadine), Hershel Johnson (Rosalee), Keith Johnson (Tina), Annette Pugh and Faithe White(Tyrone), 23 grandchildren, 39 great grandchildren and 6 great great grandchildren, along with a long list of family, friends, and brethren in the body of Jesus Christ. To access LIVESTREAM of visitation, please click the link below: http://webcast.funeralvue.com/events/viewer/57462/hash:0361365ABFA91D68 To access LIVESTREAM of Funeral Service, please click the link below: http://webcast.funeralvue.com/events/viewer/57463/hash:FBA89E2AAC5C2A3D

Darelene Casalena Handy Morris, peacefully departed her life in this world on July 10th, 2021, in the afternoon hours at her home in Pearland, Texas. She was the daughter of the late William and Luvenia Johnson and the first of fourteen children. For... View Obituary & Service Information

The family of Darlene C. Morris created this Life Tributes page to make it easy to share your memories.

Send flowers to the Morris family.