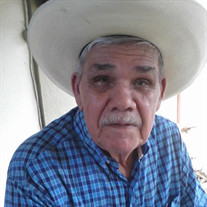 Apolonio “Polo” Sanchez Herrera, 91, of Pearland went to be with his Lord and Savior on Saturday, February 26, 2022, in San Angelo. Polo was born April 10, 1930 in Juarez, Nuevo Leon, Mexico to Maria de la Paz Sanchez and Atilano Herrera. He entered the United States, spring 1948 with an ambitious hope of a better life than the one he left in Mexico. Polo met Virginia Aguilar in Los Indios while working in agricultural labor. They married on April 21, 1952 in Villa Juarez, Mexico and were together 22 years. In 1975, he married Patsy Reyes in Houston. As a young boy, Polo had dreams of owning his own business which he later achieved. Although, an uneducated man, Polo applied hard work and ambition to pursue his dream. He worked the cotton fields of Ricardo Aguilar, his father-in-law, Bill Nelson in Houston, Victory Gunite Pools in Pearland and finally retiring in 1992 from the City of Pearland Water Department. Polo applied the skills he learned from working the cotton and rice fields, digging for pools and working for the City of Pearland. He was encouraged by one of his former bosses, David Smith, to purchase backhoe equipment to start his own business. In 1975, Polo’s Backhoe Services was created. He continued to work his regular job and offered backhoe services on the side. Polo enjoyed sitting around with friends sharing adventures of his move from Mexico to the United States. He enjoyed listening and dancing to ranchera music. After, his health began to decline you could find him sitting by the window reading the Bible and watching others go by. Polo lived in Pearland for 54 years until he moved to San Angelo in 2012 to be close to his daughter. He leaves behind his daughter, Norma Castillo and husband Albert; three grandchildren, Randy, Mike and wife Adriana, and Valerie Kim and husband Patrick; four great-grandchildren, Trinity, Bella, Sephi and Malakai; his sister, Lupita Caballero; brother, Gonzalo Herrera; and numerous nieces and nephews. The family would like to give a special thanks go to his caregiver, Oralia Guidry, Kindred Hospice Nurses, Sarai Prather-Cox and Stephanie Gesch, Chaplain, Domingo Lopez, Dr. Peterson, Dr. Sun and friends from Oak Grove Senior Apartments.

The family of Apolonio Sanchez Herrera created this Life Tributes page to make it easy to share your memories.

Apolonio “Polo” Sanchez Herrera, 91, of Pearland went to be with...

Send flowers to the Herrera family.