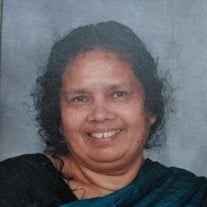 Mrs. Aleyamma Chacko was born in Mavunilkunnathil house in Kuzhikala, Kerala, India in 1936. Her mother Aleyamma was from Manapallil house in Kidangannur, just 3 miles from Kuzhikala. Aleyamma’s father passed away when she was only four years old. She and her younger brother (Abraham Mathai of Chicago) were raised by their single mother working tirelessly to support them. Aleyamma was married in 1953 to Thomas Chacko from Annikkattu family and completed her high school education before having three children. Later, she attended a bible college with her husband and pastored churches with him for about ten years in Kerala. In 1972, she and her son followed her husband to America. She worked for the next thirty years to support her family, including bringing her daughters to America in 1974. Aleyamma also supported several missionaries and churches in Kerala. In addition to providing her children spiritual education as their Sunday school teacher, she encouraged her children and grandchildren to achieve post-secondary degrees and financial independence. She believed that education was the key to making the American dream a reality. Aleyamma was very proud of her children and grandchildren’s many educational and career achievements. She is survived by her husband, Pastor Thomas Chacko, her three children and their spouses: Annamma & Joseph Kurian of Houston, Aleyamma & Kenneth Paoletti of Seattle, and Sam & Judy Chacko of Colorado Springs. She is also survived by her ten grandchildren, Marsha & Jerin Thomas, Ester Kurian, Isaac Kurian, Jensine Paoletti, Christina Paoletti, Benjamin Chacko, Deborah Chacko, Zoe Chacko, Bejoy Chacko, and her one great grandchild, Silas Thomas. Throughout her life, Aleyamma was an advocate for many social causes. In her childhood she participated in boycotts and marches associated with the Indian independence movement. In America, she advocated for racial equality and vigorously supported the Civil Rights movement. She believed that all people deserved respect and safety. In honor of her memory, we ask that you consider making a donation to the Houston Area Women’s Center, a local organization that provides shelter, counseling, and legal services to women and children affected by violence. You may make donations on their website by (1) entering tinyurl.com/aleyammachacko in a browse Access for youtube live stream: https://www.youtube.com/watch?v=7ybOjgnB1eQ

Mrs. Aleyamma Chacko was born in Mavunilkunnathil house in Kuzhikala, Kerala, India in 1936. Her mother Aleyamma was from Manapallil house in Kidangannur, just 3 miles from Kuzhikala. Aleyamma&#8217;s father passed away when she was only four... View Obituary & Service Information

The family of Aleyamma Chacko created this Life Tributes page to make it easy to share your memories.

Mrs. Aleyamma Chacko was born in Mavunilkunnathil house in Kuzhikala,...

Send flowers to the Chacko family.