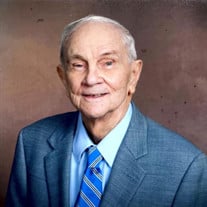 How does one sum up the life of a remarkable, larger than life man like Bill McCord? While almost impossible to do so in such few words, his life and legacy begs to be told. William ‘Bill’ Filmore McCord was born October 10, 1929 in Parrish, Florida, the place he dreamed about and painted often in his oil landscapes. While his childhood was by no means ordinary, and in some cases quite difficult, Bill’s “glass half-full” mentality saw it as picturesque. In his father’s absence, Bill and his older brother Dan, grew up in a house full of women… aunts, cousins, and Bama (as his mother was known), all with plenty of spunk and personality, all doting over Bill in excess. If you’ve ever had to help Bill find his missing car keys, cancel his lost credit card or locate a phone number, you can thank the Parrish women. Old habits die hard. And yet, we love him all the more for that memorable quirk! While Florida was Bill’s beloved state, Texas became his home. He headed west after trusting his life to Jesus Christ, the pivotal moment that not only changed the way he lived, but also his eternity. In search of a college that would grow his faith, Bill entered Hardin Simmons University. Years later, Bill would go on to become a Board of Trustee Member and the Alumni of the Year at his beloved alma mater that had played such an instrumental role in his life. His faith in Christ flourished during his college years and Bill became set apart as a man who yearned to show others the good God that he had found. After graduation, Bill was attempting to enter Baylor Dental School and would tell one of his many “ there is no such thing as a coincidence in a Christian’s life” stories about his acceptance. Since he had not received a call about his application, he made the trek to the dental school’s admissions department. Upon arriving and befriending the assistant, in the way only Bill could do, they found that his dental school application had slipped behind the filing cabinet and had not been seen by the admissions team. Bill was immediately whisked around the admissions department by the apologetic assistant, and shortly after, was accepted into Baylor Dental School. No such thing as a coincidence! Upon entering dental school, Bill met, courted, and married a beautiful Baylor nursing student: the love of his life, Shirley McMillin. Between a prestigious Air Force assignment and dental degree, the two started their new life together in Pampa, where their oldest daughter Sallyanna was born. They moved once again to Pasadena, TX to start one of the first pediatric dental practices in the Houston area and to grow their family with the addition of their second daughter, Sherelee. With a thriving practice under way, Bill’s generous heart and giving personality was on display for all to see- offering exceptional care to any child, regardless of his or her ability to pay, impacting thousands of children in a far-reaching way. Not only did Bill love his family and his profession, he had a passion for deer hunting, oil painting and flying airplanes. Each fall Bill would join family and friends to hunt for whitetail and mule deer. Bill’s hunting skills and stamina were legendary. Bill’s paintings are truly beautiful and his “southwest impression” style unique. Although Bill was a commercial artist who sold many of his pieces, one of his greatest joys was to give away paintings to family and friends; those paintings are cherished by all lucky enough to have received one. Bill was also an accomplished pilot who logged many flying hours. Ironically, he was a far more cautious pilot than driver. One of his close friends commented, “the most dangerous thing about flying with Bill is him driving you to the airport!” While these hobbies and interests brought great joy to Bill’s life, one of his unique callings came in the form of serving at his local church, South Main Baptist in Pasadena. He was a deacon and loyal member, finding great fulfillment in serving and volunteering. The community of precious friends within his church home was a huge part of his life, ministry and support system. But more than anything, Bill loved people. He never met a stranger; he cared deeply for every person he encountered and truly believed everyone to be a unique and special gift from God- worthy of time and relationship. He loved others enough to want to share with them the saving power of Jesus, ministering to and praying for all those he came in contact with in his life. As years passed, tragedy struck Bill and his family, but his faith never wavered and his willingness to be used by God never faltered. Health issues, losing his two precious daughters and later, his beloved wife, all to cancer, led many to question how a man like Bill could still remain joyful after such heartbreak and suffering. And yet, his life anthem remained the same: “The Lord has been so, so good to me.” The same statement he uttered up until the day he died. Bill leaves behind adoring grandchildren, great-grandchildren, nieces, nephews and countless extended family and friends, through whom carry on his powerful legacy. He is described by those who survive him as, joyful, generous, positive, content in all circumstances, eternally-focused, an evangelist, forgiving, never inconvenienced, hilarious, Godly. Now, as he is joyfully reunited with his wife and daughters in heaven, he is described by His Lord and Savior as a good and faithful servant. Well done, precious Bill. Well done.

How does one sum up the life of a remarkable, larger than life man like Bill McCord? While almost impossible to do so in such few words, his life and legacy begs to be told. William &#8216;Bill&#8217; Filmore McCord was born October 10, 1929... View Obituary & Service Information

The family of William Filmore McCord created this Life Tributes page to make it easy to share your memories.

How does one sum up the life of a remarkable, larger than life...

Send flowers to the McCord family.