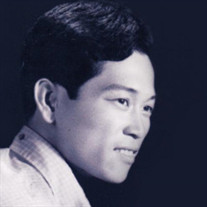 Youk Ang departed this life on December 04, 2020 at the age of 76. His life was well lived, and he was well loved! The Lord called him home in a peaceful manner, with his family by his side, after several months of declining health and a massive stroke. Family and faith was the pivotal essence of Youk’s life. He was proud and honored to be the patriarch, father, and grandfather to our large family. He has been a major presence in the lives of his children and grandchildren. Youk is survived by his wife and best friend of 50 years, Kimmy Nay Ang, his beloved children and in-laws, Davy & Jim Hawkins, Davuth & Sharon Ang, Dary Ang, David Ang and Amy & John Moya. He is a proud grandfather to Adam Hawkins, Thomas Hawkins and Linley Hawkins, children of Davy and Jim Hawkins; Elijah Ang and Luke Ang, children of Davuth and Sharon Ang; John (Bubba) Moya, Dominic (Nicky) Moya, and Emilia Moya, children of Amy & John Moya. Born on June 08, 1944 in Kâmpóng Saôm, Cambodia to Ma Ang (Father) and Meng Chan (Mother) and the oldest sibling of 3, he is preceded in death by his parents and sister. After losing his parents and sister at the age of 14 due to a tragic accident, he and his brother, Chouy Ang, resided and were adopted by their cousin Kav Ang. Through extreme sacrifice and determination, he worked in the family business as a fisherman at an early age to create a better life for himself and the family. At the age of 27, he married the love of his life, Kimmy Nay Ang, the daughter of a farmer, on January 15, 1970. Following the Vietnam war and fleeing the oppression of the Pol Pot Khmer Rouge Regime, Youk gathered his wife, sister-in-law, Hieng Nay Tia, son, Davuth and daughter Davy and successfully escaped to the border of Thailand. While residing in the refugee campgrounds of Thailand for 3 years with family and friends, he and his wife had a son, Dary in January of 1977. In 1978, at 33 years old, Youk immigrated to Houston, Texas and was forced to establish a new life in a foreign country with his family of 6. Shortly after, they added 2 additional members to his growing family, son, David and daughter, Amy. Youk spent his life as a hardworking, dedicated, faithful and loving man. He worked at J.T. Thorpe and retired at the age of 61. He was an avid traveler visiting places such as Australia, France, Singapore, China, and Europe and his favorite hobby was fishing. He had a life commitment to Jesus Christ and spent many years serving in the local church at South Main Baptist Church, Park Place Baptist Church and Garden Villas Baptist Church. He will be forever remembered for his beautiful smile, gentle eyes, caring heart, loving embrace, and unconditional love. Although our hearts are heavy, we will celebrate his life and find comfort that he is in heaven watching over us. A visitation for Youk with his family will be held Sunday, December 13, 2020 from 12:00 PM to 2:00 PM at South Park Funeral Home, 1310 North Main Street Pearland, TX 77581. The funeral service will occur Monday, December 14, 2020 at 2:00 PM, 1310 North Main Street Pearland, TX 77581; with a burial to follow. The family would like to thank you in advance for all of the condolences and support. Please send all donations to paypal.me/DavuthAng

Youk Ang departed this life on December 04, 2020 at the age of 76. His life was well lived, and he was well loved! The Lord called him home in a peaceful manner, with his family by his side, after several months of declining health and a massive... View Obituary & Service Information

The family of Youk Ang created this Life Tributes page to make it easy to share your memories.

Send flowers to the Ang family.