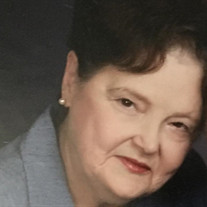 Wilma Stephanie Janecek Holloway passed away on May 22, 2021 at Kindred Hospital in Clear Lake City. Wilma was born October 30, 1942 in Wallis, Texas. She graduated from Orchard High School in 1961, before attending nursing school to pursue a career as a Licensed Vocational Nurse. She received her LVN training at St. Luke’s Hospital, and she served as an LVN in the post-partum unit for over 30 years before retiring from Southeast Memorial Hospital in 1995. She is preceded in death by her parents, BT “Cap” and Annie Janecek; and her two brothers Johnny Janecek and Dennis Janecek as well as her sister-in-law Yvonne Janecek. She is survived by her husband, Willis Holloway; her two daughters, Cheryl Holloway and Katherine Marrie, Katherine’s husband, Michael Marrie and her two grandchildren, Ryan and Elise Marrie. She is also survived by her sister, Ann Barrios, and her 4 brothers and their wives: Frank and Helen Janecek, Bobby and Irene Janecek, Benny and Kathy Janecek, and Charlie Janecek, as well as her sisters in law, Judy Janecek, Betty Janecek, and Nina Lee Chapman and her husband Tom. She was blessed with many nieces, nephews, and great nieces and nephews. In addition to spending her time with her family, she had a passion for her volunteer and worship activities at St. Luke’s the Evangelist Catholic Church of which she was a founding member, and she was a Court Mother of Unity 2292 of the Catholic Daughters. She also loved going to Dobie High School football games with her husband, traveling, and meeting with her retired nurse friends every year for dinner. Additionally, she was a member of the KJZT Czech Catholic Family Fraternal, and she donated to multiple charities and her church. Pallbearers include her nephews; Daniel Chapman, Jeff Janecek, Kevin Janecek, Ronnie Janecek, Randy Barrios; her son-in-law Michael Marrie and her grandson Ryan Marrie. Visitation will be Thursday May 27, 2021 from 5:00pm-8:00pm in the South Park Funeral Home Chapel with the Rosary to be prayed at 6:30pm. The funeral mass will be held Friday May 28, 2021 at 11:00am at St. Lukes the Evangelist Catholic Church, located at 11011 Hall Rd. Houston, TX. 77089. Burial will follow in the South Park Cemetery in Pearland, TX.

Wilma Stephanie Janecek Holloway passed away on May 22, 2021 at Kindred Hospital in Clear Lake City. Wilma was born October 30, 1942 in Wallis, Texas. She graduated from Orchard High School in 1961, before attending nursing school to pursue... View Obituary & Service Information

The family of Wilma Stephanie Janecek Holloway created this Life Tributes page to make it easy to share your memories.

Send flowers to the Holloway family.