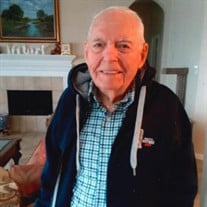 William Alfred Royalty, (Bill), passed away on Saturday, February 26th, 2022, at the age of 94. He was born in Houston, Texas December 10, 1927, to Al and Thelma Royalty. He grew up in Houston, a true native Houstonian. Lived on Elmen near downtown and then out in the "country" off of Bunker Hill on 10 acres, helping with chores and tending to a few cattle, horses and chickens. His dad would continue to work for Texaco downtown. Bill was drafted to the Army in 1945, where he served in Korea as Seargeant for two years. He loved the Korean people, and regretted not stay longer. He then started working for Humble Oil Company, which became Exxon. He retired from Exxon after 38 years in 1983. He started working on seismic crews, travelling to various locations such as Beaumont, El Campo and Victoria. He and his wife and daughter moved to various towns, part of "suitcasing" for seismic crews, living in various towns, Raymondville, San Angelo, Odessa, Pecos until finally being transferred to Houston in 1969 where he became a Geophysicist. He loved working out in the field, the dessert, the King Ranch. At the Exxon offices in Houston, he often took his co-workers to lunch in "old blue", a 1954 Chevrolet he completely refinished himself, including painting and reupholstering. Those who worked with him truly loved and respected him. He met his wife, Bertha Socarras in 1953 through his dad, who worked with her. She was from Cuba, charming and beautiful. They were wed June 19th, 1954 and were together for 50 years till her passing in 2004. He adored her, and she him. They laughed often, and travelled many times to Europe, Mexico, Hawaii and South America. Bill took his wife and daughter Sandra on many trips throughout the United States. Taking his full vacations to discover the beauty and wonder of our country. In his retirement he loved his roses and plumerias, which still remain. He was quite the handyman around the house. The last eight years he resided with his daughter Sandra. They were the best of friends and loved each other dearly. Bill is truly one of kind....a true gentleman, opening doors for his daughter till the very end. He was humble, considerate, and the true meaning of wonderful. An amazing and loving husband and father. He will very much be missed. What a beautiful soul. He is survived by his daughter Sandra, sister-in-law Norma Socarras, niece Sherry Adams and her husband Allen, Nephews Robin Smith , his wife Deborah, William Rod and his wife Johnnie, Nephew Frank Rod. In lieu of flowers, please send donations to The Salvation Army or animal shelter of choice.

William Alfred Royalty, (Bill), passed away on Saturday, February 26th, 2022, at the age of 94. He was born in Houston, Texas December 10, 1927, to Al and Thelma Royalty. He grew up in Houston, a true native Houstonian. Lived on Elmen near downtown... View Obituary & Service Information

The family of William Alfred Royalty created this Life Tributes page to make it easy to share your memories.

Send flowers to the Royalty family.