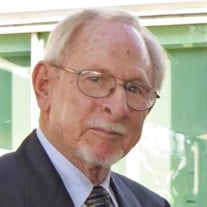 William (Bill) Austin Petersen Jr., 85, of Livingston, Texas passed away on April 13, 2021. Bill was born on August 25, 1935 to William Austin Petersen Sr. and Lucille Maxine McChristie Petersen in Junction City, Kansas. Bill’s family moved to Colorado in 1945 and he graduated from Colorado Springs High School in 1953. At the end of his first year at University of Colorado, he applied to the United States Naval Academy and barely lost out to someone from Akron, Colorado. Bill was alternately accepted to Kingspoint Merchant Marine Academy in New York graduating in 1958, which turned out to be “the best fit” for Bill. Bill graduated with the rank of Lieutenant JG in the Navy, 3rd Mate in the Merchant Marines and with a Bachelor of Science degree. In two years, William raised his license from 3rd Mate to 2nd Mate and 18 months later to Chief Mate. He sailed as a Merchant Marine from 1958 to 1966, finishing his career with the rank of Chief Mate. Bill and Marilyn L Dreher had known each other from childhood and had recently started dating and become engaged and wed on February 14, 1963, in New Orleans, Louisiana. They moved to Houston, Texas soon after their marriage. Looking to return to land, Bill pursued a law degree at the University of Houston Law Center and passed the Bar in 1966. Bill practiced Civil law in Houston with Lapin and Schwartz during the last year of law school, then with Lapin, Totz and Meyer before moving to Patterson, Bolt, Lowery and Aderholt. In 2001, Bill opened his own law firm under his name. In later years he slowly downsized his practice until in 2017 he closed his last case. The motto of Kings Point Merchant Marine Academy is “Deeds not Words”. That describes Bill perfectly. If something needed to be done, he just did it. He started working at the age of 12 as a paperboy and didn’t stop until he fully retired at the age of 82. He was always fixing or building something around the house or working on all of the used cars belonging to his teenagers in the driveway. Bill loved dancing, reading, cooking, tinkering, computers, traveling, sailing with his kids and camping with his son on Boy Scout trips. In semi-retirement Bill and his wife Marilyn traveled in their RV exploring the country, went on a safari in Africa, and drove through Europe crossing the Swiss Alps in the winter. Bill left behind his older sister Laura Maynard and his daughters Lori E. Lafour, Christine R. Petersen and son-in-law Amr, Lynette S. Miller, his son William (Bill) A Petersen III and daughter-in-law Natalie, ten grandchildren, Tamara, Robert, Usamah, Ashton, Cameron, Triston, Allison, Aleigha, William IV (Austin) and step grandchild Brenton, five great grandchildren Franky, Aaliyah, Houston, Penelope and Ryder and honorary daughter Julianna Raveala. Bill was predeceased by his wife Marilyn, his mother and father Lucille and William Petersen Sr. and his two younger sisters Maxine and Sally. Due to Covid, a Memorial service will be limited.

The family of William Austin Petersen Jr created this Life Tributes page to make it easy to share your memories.

Send flowers to the Petersen family.