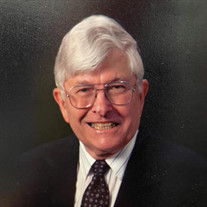 William “Bill” Jasper Boyd, age 93, of Alvin, Texas passed away December 22, 2021, surrounded by his closest loved ones, due to long-running medical conditions, and complications brought on by colon cancer. Bill was born on August 30, 1928 to parents William Robert Boyd and Bessie Harness Boyd in Pearland, Texas. His childhood years were primarily spent living in that area, then later in Alvin, Texas, where he eventually attended and graduated from Alvin High School. He was always greatly involved in church, school and community activities, as well as being quite the writer and scholar. After high school graduation, Bill left home with virtually nothing to his name, in order to enroll at the University of Texas and pursue a career in engineering. Two years later, in 1950, he paused his college course of study, in order to enlist in the Army of the United States during the Korean War. He served for 2 years, primarily in the area of radio communications. After discharge from military service, he returned to the University of Texas, in order to continue his pursuit of a college engineering degree. Despite all the odds against him, coming out of impoverished conditions, often struggling to even have food to eat or a roof over his head, he earned and received his degree in Mechanical Engineering from the University of Texas at Austin, Texas, in June 1958. Bill’s career in engineering took him to many U.S. states, other countries, and many positions throughout the years, but his two greatest passions were simple: his family and his faith. He was a devoted husband, father and grandfather, kept a positive outlook on life, rarely talked down to or about others, and usually had a huge grin on his face that could light up any room. Not to mention, he rarely missed an episode of “Jeopardy,” even in the last few months of his life. His first marriage was to Patsy Joyce Cavenaugh, of Wallace, NC, in 1959. She passed away September 2, 1991. His second marriage was to Shirley Lee Mulhollan, of Houston, TX, in 1994. She passed away December 31, 2017. He is survived by daughter Pamela Denise Boyd Sullivan and husband William of High Point, NC, son William Randall Boyd and wife Kristie of Raleigh, NC, and step-children Rob Johnson of Singapore, Rick Johnson and wife Jennifer of Houston, Sharon Dawn Tucker of Alvin/Katy, John Johnson of Beaumont, and grandchildren Kristen Sullivan, Kyle Sullivan, Jessica Boyd, Kayla Boyd, Stephen Johnson, John Tucker, Elisabeth Johnson-Brinkman, James Johnson, and Jade Johnson. Bill was also one of 11 children. He is survived by siblings Martha Boyd Peterson, Robert Wayne Boyd, Rachel Boyd Moll, Donald Roy Boyd, Jane Boyd Bohannon, and Joseph Alexander Boyd. He is preceded in death by siblings Lawrence (Larry) Ferdinand Boyd, Lois Boyd Williams, Frances Boyd Rhodes, and Elizabeth Boyd Stevenson. If you are unable to join us in service please follow link provided: http://webcast.funeralvue.com/events/viewer/65862/hash:B951E5AC45E9E92C For those wishing to donate to a worthy cause in lieu of flowers please donate to the Alvin Animal Adoption Center: https://www.alvin-tx.gov/page/AnimalShelter.About or Alvin Community College Foundation:https://epay.alvincollege.edu/C20358_ustores/web/store_main.jsp?STOREID=17 -to donate to various college-related causes, such as scholarships, emergency funds, help with food and necessities for those in need.

William &#8220;Bill&#8221; Jasper Boyd, age 93, of Alvin, Texas passed away December 22, 2021, surrounded by his closest loved ones, due to long-running medical conditions, and complications brought on by colon cancer. Bill was born on August... View Obituary & Service Information

The family of William Jasper Boyd created this Life Tributes page to make it easy to share your memories.

Send flowers to the Boyd family.