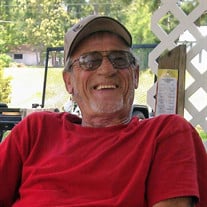 Wilburn Leslie Terry, age 74, of Onalaska, Texas, passed away on December 25, 2020. A private graveside funeral service and burial will be held on Tuesday, January 5th, 2:00 PM at the Pearland South Park Cemetery. Chaplain Charles Abuyeka of the Houston Methodist Hospital will be officiating. Will was born in Matador, Texas on July 24, 1946 to Les and Majo Terry. He graduated from Matador High School and shortly thereafter enlisted in the Army, becoming Specialist 5th Class, rank of Sergeant while serving in Vietnam. He earned the National Defense Service Medal, the Vietnam Campaign Medal, and the Vietnam Service Medal. He was honorably discharged in 1967 and worked as a specialty contractor in the masonry restoration industry for many years. He enjoyed fishing, the outdoors, and spending time with his dog, Lucky. He was always very proud of his children and grandchildren. Will is survived by his children Liz (Bobby) Ledbetter, of Pearland, TX, Charlene (Audie) Bustamante of Wharton, TX, Joann (Glen) Hadaway of Parker, TX, Colleen (Michael) Fallon, of Louisville, CO, as well as seven granddaughters and two grandsons. He is also survived by his mother, Majo Russell Terry, his sister Roseanne (Ronnie) West, and their children Ronda (Brian) Turnbough and Becky (Matt) Woodall, all of Big Spring, TX. Will is preceded in death by his father, Leslie Henry Terry. The Terry Family wishes to thank the descendants of Mr. and Mrs. H. G. West for their generous support in honoring Will’s last wishes to be buried next to his father. In lieu of flowers, memorial donations may be given to the Wounded Warrior Project.

The family of Wilburn Leslie Terry created this Life Tributes page to make it easy to share your memories.

Send flowers to the Terry family.