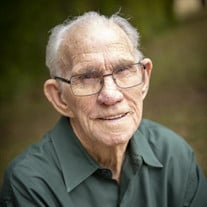 Waymon Kenneth Worsham received his heavenly crown at 1:25 p.m. on Wednesday, October 21st, 2020. He died peacefully with his daughter, Waynette by his side. He was a devoted husband, father, grandfather and great grandfather. Waymon was born on September 10, 1933 to William Felix Worsham, Sr. and Ola Opal Landers Worsham in Iola, Texas. Waymon was one of 12 children. He learned early the meaning of hard work, integrity, love for God and family. He left Iola upon graduating from high school on May 29, 1953 and accepted a machinist position at Hughes Tools Company in Houston. Waymon met Twila at Harbor Baptist Church where they were married on June 25, 1955. Waymon would be drafted into the Army at the end of 1954. Waymon was stationed in Ft. Benning, Georgia. While in the Army he received training on repairing office equipment. Twila eventually followed Waymon to Ft. Benning where they met many lifelong friends. Waymon received an Honorable Discharge from the Army on December 13, 1956. After Waymon was discharged from the Army, he and Twila moved back to Houston. On May 21, 1957, Waymon & Twila welcomed their first child, son Waymon Scott Worsham. The next day Scott passed away from collapsed lungs. On June 23, 1958, they welcomed a daughter Twila Waynette. Almost 4 years later they welcomed their last child a son, Charles LaWayne on April 27, 1962. Waymon accepted a job with Remington Rand Office Machines in San Antonio, Texas in 1965 where he repaired typewriters and office equipment. Over the years, his career took him across the country where the family lived in Fremont, California, Albuquerque, New Mexico and Omaha, Nebraska. In July 1974, Waymon accepted a position with Century Business Equipment which brought them back to Houston. They would move back to their old neighborhood of Songwood in northeast Houston. Waymon, Twila, Waynette and Chuck joined South Main Baptist Church in the summer of 1976. Both Waymon and Twila were blessed by being members at South Main and were loved and respected by their South Main family. One of Waymon’s greatest Christian honors was being ordained as a Deacon on December 14, 1958 along with his father-in-law, Marvin Tynes. Waymon could be found early each Sunday morning faithfully serving as an Usher and Greeter at South Main Baptist Church, a role that he would faithfully fulfill almost to the end of his life. Waymon was a part of the greatest generation of our time. Waymon was preceded in death by his wife Twila, his parents William Felix and Ola Opal Worsham, son Waymon Scott, brothers George & Carroll, sisters Leona, Virginia, Vivian & Donna Jean. Waymon is survived by his daughter Waynette Clarke and husband Mark of Sugar Land, son Chuck Worsham and wife Bobbie of McKinney, Texas. Grandchildren include Amanda Walker and husband, Andrew of Missouri City, Andrew Clarke and wife, Kasey of Houston, Landry Worsham of McKinney, Taylor Fuller and wife Meghan of McKinney, Jeremy Prater and wife, Stephanie of Wylie, Justin Prater and wife, Courtney of McKinney. Great Grandchildren include, Autumn, Olivia and Declan Walker, Logan and Chase Fuller, Paige and Savannah Prater, Layne and Perry Prater. He is survived by brothers Bill Worsham, Jerry Worsham, John Worsham and Dennis Worsham and Brooksie, Twila’s sister. He is also survived by many wonderful nieces and nephews.

Waymon Kenneth Worsham received his heavenly crown at 1:25 p.m. on Wednesday, October 21st, 2020. He died peacefully with his daughter, Waynette by his side. He was a devoted husband, father, grandfather and great grandfather. Waymon was born... View Obituary & Service Information

The family of Waymon Kenneth Worsham created this Life Tributes page to make it easy to share your memories.

Send flowers to the Worsham family.