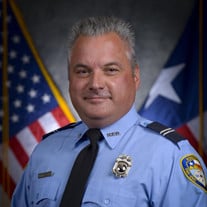 Walter Luna was born in Nederland, Texas on March 30, 1971. The son of Judi and Henry Luna, Walter graduated with honors from J. Frank Dobie High School in Houston and then served honorably in the United States Military Corps. After earning three associates degrees, Walter was pursuing a Bachelors Degree in Information Technology at the University of Houston at the time of his passing. Walter was an extraordinary husband, father, son, firefighter and friend. His survivors include his wife April; daughter Makayla Potts and fiancé Sean Strickland; his mother Judi; father-in-law Bill Pillars; grandmother Maria Graciela Luna; sister-in-law Robin Reed and brother-in-law David; nephews Joshua, Brendan and D.J. Reed; and many loving aunts, uncles and cousins. Walter was predeceased by his father Henry and his mother-in-law Margaret Pillars. Walter was a member of the Houston Fire Department Academy Class of 1994. An experienced, committed Engineer Operator, his 26-year HFD service included a final assignment at Station 72 on the D shift. He was a proud member of the Houston Professional Fire Fighters Association-IAFF Local 341. His respect and love for his brothers and sisters in the fire service was only strengthened by the recent years of political and legal challenges. Walter met April, at the age of 11, and they reconnected many years later through mutual friends. April was the love of his life. He adored her daughter and her fiancé, and his in-laws. He strived to be a good firefighter and a better person. He never forgot where he came from and admired and honored his parents, aunt and uncle. To his family and friends, Walter was loyal, kind, giving and fiercely loved. He lit up a room. He was a shining light. Walter enjoyed smoking a good cigar with friends and many wonderful times with family members, including father-in-law Bill and Makayla, who he loved as his own daughter. He was sentimental and generous with his gifts to family and friends. Walter also is missed by his three beloved dachshunds, Guinness, Bandit and Bella. Walter loved his memory of Bandit’s secret life at the fire station, where as a puppy he spent many shifts in service to the city. The Luna family offers gratitude for the support of the HFD Family and the Houston Professional Fire Fighters Association.

Walter Luna was born in Nederland, Texas on March 30, 1971. The son of Judi and Henry Luna, Walter graduated with honors from J. Frank Dobie High School in Houston and then served honorably in the United States Military Corps. After earning... View Obituary & Service Information

The family of Walter Luna created this Life Tributes page to make it easy to share your memories.

Send flowers to the Luna family.