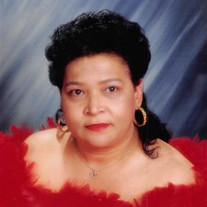 Verna Mae “Teet” Lavergne Guillory gained her angel wings on November 29, 2021, at her home in Houston, TX. She was 74 years old. Our Verna, wife, mother, grandmother, great-grandmother, and friend lived a fiery life from beginning to end. She shared an amazing legacy with “her Ervin” reaching the beautiful and rare height of 53 years of love, laughter, and tears. She was born on November 17, 1947, in Lafayette, Louisiana to Herman and Ella Mae Lavergne. She married Ervin Guillory on November 23, 1968, at Holy Ghost Catholic Church in Opelousas, Louisiana, and had three daughters, Shanda, Djuana, and Tenique. Verna’s life may seem long to some, and perhaps too short to others, but for those of us who are blessed to have been touched by her understand that her existence and the imprint she left on our hearts exceed the quantity of time we have shared with her. She was a fierce woman—she was steadfast in her beliefs, defended her loved ones, and always took opportunities to better herself. After graduating high school, she attended business school, which served her well throughout her life. As an active church member, she served as a Eucharistic Minister, was in the Legion of Mary, Ladies of Auxiliary, and was an Adoration volunteer. She earned her cosmetology license, which benefited her as a hairstylist and manicurist. After retiring, she learned Spanish, computer skills, and pursued vocational endeavors. On Monday, November 29, 2021, God called, and Verna answered. She was preceded in death by her parents, Herman Lavergne, Sr. and Ella Mae LeBlanc Lavergne; two sisters, Gloria Mae and Louanna, and one brother, Herman, Jr. She leaves to cherish her memory her devoted husband, Ervin; children: Shanda (Kevin), Djuana (Henry), and Tenique (Aeron); grandchildren: Timothy, Chanlin, Trenton, Kyla, Tristan, Kymori, Cayden, Kaylei, Dylan, and King; and two great-grandchildren: Kaycen and Karris. She is also survived by six sisters, three brothers, a host of nieces, nephews, other family members, and friends. Accepting our new normal is difficult, however, we strive to recall her words. As our mama would affectionately say, “Stay on top” and “Never say goodbye, say later.” If you can not join the family for visitation and the Rosary please watch via this link here http://webcast.funeralvue.com/events/viewer/64873/hash:13FF54413F33F6D7

The family of Verna Lavergne Guillory created this Life Tributes page to make it easy to share your memories.

Send flowers to the Guillory family.