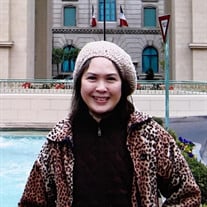 On January 1st, 1955 (Year of the Horse), in the majestic mountainous region of Da Lat, Vietnam, Thu Van Tran was born to Anh Nguyen and Nam Thi Nguyen. Van had the most beautiful complexion that her husband attributed to the cool and fair climate of her birth town. Growing up, Van was an only child raised by a single mother who absolutely adored her. Times were challenging, but she inherited her mother's resilience and tenacity, which would serve her and her family in the coming years. In 1972, while living on the island of Con Son, Van met Phat Tran, the man she would spend the rest of her life with (49 years!). Her close nephew, Hunter, described their marriage as the very definition of a happy and blissful union. Van grew up in the era of the Vietnam War. At the fall of Saigon in 1975, Van fled the country on a small boat with her husband. She was more than 8 months pregnant. It was during this treacherous journey that Van's strength and resilience were put to the test. She and Phat endured 5 rough nights at sea, stealthily evading communist ships and pirates, in a slowly leaking boat. They were forced to travel in absolute darkness, as any light would reveal their presence and seal their fate. On the final night, they emerged from the pitch blackness of the unforgiving sea. They had prevailed and made it to Thailand--and to freedom. This was the start of their fantastical journey through unknown lands and an uncertain future. On May 27th, 1975, in a Thailand refugee camp, Van gave birth to her first child. She was a healthy round-faced daughter aptly named Thai Lan Tran. A few months later, they received news of sponsorship in the USA. They embarked on a long voyage that took them from a US Air Force base in Thailand, through a series of pit stops, to finally landing them in Indianapolis, Indiana, where they lived out their first 5 years as Americans. On September 30th, 1977, Van gave birth to her next child, a caring and devoted daughter, Kim Lou Tran. In 1980, the Tran family moved to Texas, where Phat had landed a new job. It would be here, in Houston, Texas, that Van would build a lasting home and vibrant life for her family. On November 23rd of that year, she welcomed her 3rd child to the world, her golden monkey boy, Long Tan Tran. Van found fulfillment as a homemaker, housewife, and mother. During her leisure time, Van enjoyed watching cooking shows and especially loved the enthusiasm of Yan Can Cook! She evolved into an amazing chef. Van was also an avid reader who knew facts and trivia about a multitude of topics. You could always find her tucked away in her hammock, enjoying a good read. She had a special love for the Harry Potter books and Winnie the Pooh (especially Eeyore because of her Zodiac sign). As her children grew to be adults, Van began to fulfill her own personal dream of traveling the world. She found joy in collecting trinkets from across the globe. Van visited many places throughout the US (including the cherry blossoms of DC and New York state), Europe (including London and Paris), took countless cruises (including trips to Alaska and the Caribbean islands) and visited many countries in Asia (including Cambodia and China). She also enjoyed months-long trips back to her motherland of Vietnam. In the month before Van’s passing, no longer well enough to travel, she explored Cinque Terre, Italy, virtually through Disney’s Luca. Van lived a colorful life, filled with both tumultuous and fulfilling moments. She is described by those who knew and admired her as gentle and kind, with a nurturing feminine soul. She was voted "favorite Aunt" among her nieces and nephews. Her spirit lives on in her children, such as Lan's love of taking photos, Kim's strong will, and Long's meticulous nature. She is survived by her husband (Phat), 3 children (Lan, Kim, Long), 2 sons-in-law (Huy, Darren), and 4 grandchildren (Vivian, Lindsay, Lily, Brandon).

On January 1st, 1955 (Year of the Horse), in the majestic mountainous region of Da Lat, Vietnam, Thu Van Tran was born to Anh Nguyen and Nam Thi Nguyen. Van had the most beautiful complexion that her husband attributed to the cool and fair climate... View Obituary & Service Information

The family of Thu Van Thi Tran created this Life Tributes page to make it easy to share your memories.

Send flowers to the Tran family.