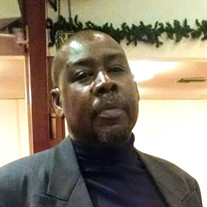 Terry Adrian Handy 62, departed this earthly life in his apartment, in Pearland, TX in the early hours on Monday, April 12, 2021. He was the son of the late Rayfield and Darlene Handy Morris. He was educated in the Somerset county school district in Maryland. In Maryland he really enjoyed detailing cars, and going to the car races at Dover Downs in Delaware, along with his son Terry Adrian Handy Jr. The Lord had blessed him with a son Daron Adrian Carr, and later from his marital union with Terena Price, he was once again blessed with a son, Terry Adrian Handy Jr. Terry moved from Maryland to Pearland, Tx about 13 years ago. He worked at Colonial Oaks Assistant Living Complex for a while in custodial care. At his passing he was employed at Windsong nursing home in Pearland, Tx. He leaves to mourn his passing, his two sons, Daron Carr, and Terry Handy Jr. His mother Darlene Morris, two sisters Meta Handy, and Hope Handy (Robert) one brother Marshall Handy (Cindy). Aunts, Uncles, Nieces, Nephews, Cousins, and a host of devoted friends and love ones, He was preceded in death by one sister Sharlene Hoskins, and one brother Rayfield Handy. He loved to make telephone calls to those he held dear to his heart, to let them know how much he really loved them. He will be greatly missed indeed. His life touched a lot of people in his own unique way. His maternal grandparents: William and Luvenia Jonson, along with his paternal grandparents Sidney and Bessie Handy precede him in death. Psalm 23 The Lord is my shepherd; I shall not want. He maketh me to lie down in green pastures: he leadeth me beside the still waters. He restoreth my soul: he leadeth me in the paths of righteousness for his name's sake. Yea, though I walk through the valley of the shadow of death, I will fear no evil: for thou art with me; thy rod and thy staff they comfort me. To access LIVESTREAM, please click the link below: http://webcast.funeralvue.com/events/viewer/52839/hash:E4CC89DD484BAB9F

Terry Adrian Handy 62, departed this earthly life in his apartment, in Pearland, TX in the early hours on Monday, April 12, 2021. He was the son of the late Rayfield and Darlene Handy Morris. He was educated in the Somerset county school... View Obituary & Service Information

The family of Terry Adrian Handy created this Life Tributes page to make it easy to share your memories.

Terry Adrian Handy 62, departed this earthly life in his apartment,...

Send flowers to the Handy family.