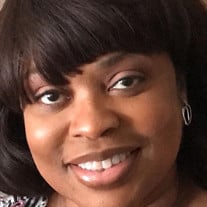 On September 26th, 1968, the city of New Orleans, Louisiana welcomed Terri Dionne Watkins into this life. New Orleans is a place known for its uniqueness, flare, talent and hospitality, and much like the city in which she was raised, Terri Watkins exuded the same. Ever the creative at heart, Terri partook in tap dancing, writing, and at any moment’s notice, proudly performing the entirety of Sugarhill Gang’s Rapper’s Delight. Terri was constantly challenging herself to live beyond her comfort zone, which is how she became a flag twirler at John McDonough High School. Marching alongside the band at Mardi Gras day parades was just one of the many fond memories from her early years in New Orleans. Terri would later attend Dillard University before curating a life of her own in Houston, Texas. In Houston, Terri soon became a member of The Bridge, Southwest Community Christian Center where she served as part of the Greeter’s Ministry. She enjoyed many things in this life, some of which included singing along to Teena Marie at odd hours of the night, hanging out with family and friends, and enjoying a night in with a good book. Terri Dionne Watkins was the best kind of person. To know her personally was a real treat - for one, because she was an amazing cook. Her gumbo and sweet potato turnovers were the highlight of many Thanksgiving dinners. However, the real treat was having the opportunity to experience her love, devotion, generosity, and humor. Terri never shied away from helping another in need. She used her own hardships to advise and encourage those around her. She was a confidant and source of comfort to many, and she always knew the right joke to bring you a smile whenever you felt down. Yet, the most notable quality Terri possessed was her faith in God. In this life, Terri faced many tribulations, but she never allowed them to prevail against her. “I’ll cry about it for five minutes, then I have to get back up and keep going” was the motto she lived by. Her faith allowed her to thrive instead of simply surviving, to touch the hearts of many, and to leave a lasting legacy on this earth. Terri Dionne Watkins will be sorely missed. She is survived by two children, Bria C. Okere and Arinze B. Okere, as well as her long-time friend and partner, Eric T. Okere. She is also survived by her mother, Janice A. Watkins, her brothers, Calvin Watkins and Kermit Watkins, and a slew of friends and family who cherish her just as much as she did them.

On September 26th, 1968, the city of New Orleans, Louisiana welcomed Terri Dionne Watkins into this life. New Orleans is a place known for its uniqueness, flare, talent and hospitality, and much like the city in which she was raised, Terri Watkins... View Obituary & Service Information

The family of Terri Dionne Watkins created this Life Tributes page to make it easy to share your memories.

Send flowers to the Watkins family.