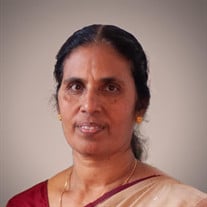 Sosamma Mathen, affectionately called Kunjumol, was born on October 23, 1946 to the late Mr. P.V Itty and the late Mrs. Aleyamma Itty (Illathu Parayathanathu, Mallappally, Kerala). After completing High School, she married her husband, the late A.M Mathen (Aekkalathil, Mallapally), on September 9th,1965, and moved to the Andaman and Nicobar Islands where A.M. Mathen worked as a Junior Engineer in Central P.W.D. There, they started their family, and the couple was soon blessed with two children, Reji and Sheela. The family later migrated to the United States in 1987 and established their roots in Houston. She was a dedicated member of Trinity Mar Thoma Church for 34 years. She thoroughly took part in all church activities such as Sevika Sangham, Edeveka Mission and Senior Citizen Fellowship as well as served diligently for VBS and other church events. Above all she was a dedicated, nurturing, faith-instilling Grandmother and Aunt, who took care of her five grandchildren. She played a big role in raising Neethu, Ryan, Nekha, Roshan, and Ria, all of whom she loved dearly and supported in every endeavor. She also had many nieces and nephews who she regularly took care of, prayed for, and loved. Her caretaking nature was also represented in her work in the healthcare field as she diligently held the roles of patient care assistant and unit clerk at St. Joseph’s Medical Center in Houston for 28 years. Aside from taking care of her grandchildren, her hobbies included gardening, shopping, sewing, traveling, and cooking. She would spend a lot of her time in the backyard tending to her krishi, growing vegetables and giving them to others. Her unwavering faith carried her, regularly listening to sermons, taking part in prayer meetings, attending conventions, and being an active participant in church. She was attentive in her faith and her thirst for the Lord was admired by all who knew her. She showed her love of Christ through the way she loved and served others around her. Her smile and heart will never be forgotten. She was ready at all times for the Lord, and answered His call on October 23th, 2021. Kunjumol is survived by her children Reji and Sheela, Daughter-in-law Jessy and Son-in-law Shajan. She was blessed with five grandchildren, Neethu, Ryan, Nekha, Roshan and Ria. She is also survived by her siblings P.I. Varghese and family, P.I George and family, and Aleyamma Koshy and family. Her passing will be felt deeply by all those who knew her or befriended her, but we are at peace knowing she is finally in Heaven where she dreamed of going to be with her Savior. She will be watching over all of us with her beautiful smile.

The family of Sosamma Mathen created this Life Tributes page to make it easy to share your memories.

Send flowers to the Mathen family.