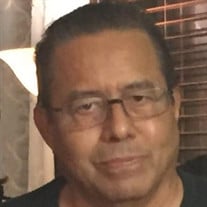 Santos Montemayor, 78, devoted husband, father and mentor, of Pearland, Texas, departed this life on October 15, 2020. Born on March 16, 1942 to the late Brigido and Jesusa Montemayor, in Burnet, Texas, relocated to Houston during his childhood and was a 1962 graduate of Milby High School. Santos married his beautiful bride on April 19, 1964 and they made their home in Pearland in 1974. Santos made a lifelong positive impact on many young men in the Magnolia area of Houston’s East End in the 60’s and 70’s as a well-respected boxing coach, which will be forever reminiscent in his accomplishments and legacy. Santos worked for many years at JW Lighting and then Suhm Spring Works and was a successful business owner of Pearland Formal Wear until retirement, allowing him to spend more time with his family and his love of restoring classic cars in his garage. Santos will be lovingly remembered by his wife of 56 years, Rosalie; sons, Christopher and his wife Sandra, Stephen, Dennis and his wife Leslie; grandchildren, Gilbert, Jesse, Daniel, Gaby, Victoria and Zachery; brother Joaquin and wife Marie; sister Brigida and husband Horacio; sister Lupe and husband Paul and many nieces, nephews and other relatives and friends. In addition to his parents, Santos was preceded in death by his sister Enedina Montemayor. He will be deeply missed by all who knew him. The Montemayor family would like to express their deepest appreciation and profound gratitude to everyone who has extended their condolences, sympathies, prayers and support during this difficult time.

Santos Montemayor, 78, devoted husband, father and mentor, of Pearland, Texas, departed this life on October 15, 2020. Born on March 16, 1942 to the late Brigido and Jesusa Montemayor, in Burnet, Texas, relocated to Houston during his childhood... View Obituary & Service Information

The family of Santos Montemayor created this Life Tributes page to make it easy to share your memories.

Send flowers to the Montemayor family.