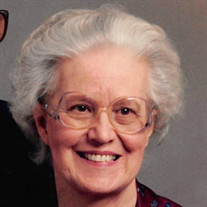 Roselyn Ruth Brown was born July 25, 1930 to Joseph Lamar Ford and Iva Mae Havenkott in Houston, Texas. She operated a comptometer in her late 30's and mid 40"s during the summer months for a part-time job. She was a member of Lawndale Baptist Church since the age of 14 when she accepted Christ as her Lord and Savior. In her church, she was a Sunday School teach to children in grades 1-3 for many years, and later on, she became the Sunday School teacher for adults. One of her major passions was the Woman's Missionary Union of the Southern Baptists for many years, and she used to take her young daughter to these meetings. She was tough. A Houston girl her whole life. She married Clarence McFarlane Brown at age 18 who deceased in February of 2013. She was smart as a whip and got a full ride scholarship to Rice University, but turned it down because she wanted nothing more than to have kids. She had polio at 25 before the vaccine was invented and was on crutches or in a wheelchair the rest of her life. So even in her 70's , her biceps were huge! However, polio never stopped her from doing what she wanted to do and needed to do. She raised 3 children, Doran, Joel, and Clarlyn who have survived her, and she always went to their many school functions, graduations, and even weddings. She was an excellent painter when she was young and learned to paint as part of therapy in the hospital when she had polio. She was methodical, constant, and loved God. Her granddaughter, Tabitha Tyree who survives her states, " I miss her deep Texas twang, the religious drinking of sweet tea, and when she would get mad playing spades." Her granddaughter, Samar says, " I'll always remember her as the pillar of faith in our family. She survived polio and completely lost her ability to walk at around the age of 25. She taught me that it sometimes takes great faith to accept circumstances in our lives, regardless of how bad things might be. Despite losing mobility in her legs, she lived a long, God fearing life and was always thankful to Jesus." She is also survived by her grandson-in-law, Stephen Tyree, granddaughter Tabitha Tyree, and her granddaughter Samar Bhatti. For those unable to join the service can join us by following the link provided: http://webcast.funeralvue.com/events/viewer/49785

Roselyn Ruth Brown was born July 25, 1930 to Joseph Lamar Ford and Iva Mae Havenkott in Houston, Texas. She operated a comptometer in her late 30's and mid 40"s during the summer months for a part-time job. She was a member of Lawndale Baptist... View Obituary & Service Information

The family of Roselyn Ruth Brown created this Life Tributes page to make it easy to share your memories.

Send flowers to the Brown family.