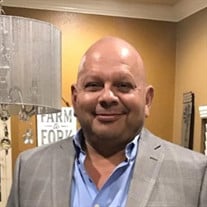 Rodolfo “Rudy” Inclan was born in Cotulla, TX on April 15, 1962. He passed away in his home on Tuesday, April 20th, 2021 surrounded by his loving wife and four beautiful daughters. Rudy was diagnosed with a rare Non-Hodgkins Lymphoma in March of 2016 and he bravely fought this disease for five years. His courageous battle ensured his family would be left with great memories of their time together and lots of love that they could carry with them after he was gone. He is preceded in death by his father, Juan Manuel Inclan, his mother, Elva Garcia Inclan, and his brother, Ramon G. Inclan. He leaves behind his wife, Dianna Inclan and his four daughters, Miranda (and husband Paul) Gonzales, Amanda Moreno, Mercedes (and husband Adrian) Ochoa, and Arianna Inclan. He will also be missed by his five grandchildren, Aiden and Baby Gonzalez, Jayla and Leah Moreno, and Raelynn Ochoa. Rudy also has three sisters and three brothers who will miss his presence in their lives. Rudy was a family man and well known in his community of Rosharon, TX. He started Rudy’s Automotive in 1996. He proudly served the members of his community through his business, at his church, and as a FB ESD7 County Commissioner sat on the board of commissioners. His greatest passion, beyond his family, was working on cars and helping people. As his daughters grew, he found ways to share his passion for cars with them and later with his grandchildren. He was a great man who leaves behind a legacy of strength, courage, and service to all those he knew. All services will be held at: South Park Funeral Home 1310 N. Main St. Pearland, TX 77581 A public visitation will be held on Sunday, April 25th from 5:00 – 7:00 p.m. On Monday, April 26th a short service will be held at 2:00 p.m. with the burial to follow at 3:00 p.m. In Lieu of flowers please donate to the PayPal fund @rudysride15

Rodolfo &#8220;Rudy&#8221; Inclan was born in Cotulla, TX on April 15, 1962. He passed away in his home on Tuesday, April 20th, 2021 surrounded by his loving wife and four beautiful daughters. Rudy was diagnosed with a rare Non-Hodgkins Lymphoma... View Obituary & Service Information

The family of Rodolfo Inclan created this Life Tributes page to make it easy to share your memories.

Send flowers to the Inclan family.