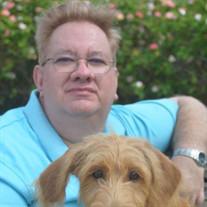 Robert Martin DeVault was born on August 23, 1964 in Heidelberg, Germany. Bob was preceded in death by his parents, Annette and David, and his older sister, Susan. The DeVaults, who met in Germany while David served in the U.S. Military, eventually settled in Texas. Bob is survived by his wife, Stacey. He will also be greatly missed by his mother-in-law, Jerry Griffin, who regarded him as a son rather than a son-in-law. Bob graduated from James Madison High School where he was a member of the band. He referred to his fellow band members as “great allies” who were always looking after one of their own. His love of music stayed with him long after his band days. He had an extensive recording collection and-despite not playing a note for 35 years-- held on to his clarinet. After high school, Bob attended the University of Houston Hilton Restaurant Management Program which led to a career encompassing many aspects of technology and hotel management. He became an avid Cougar sports fan who, along with his sister, Susan, cheered their team on and stayed up late playing cards and games with their friends Frank and Hilary. In addition to being technically minded, Bob loved opportunities to build rapport with people learning new platforms. He reveled in leading training classes and impressed his students with his ability to recall names and to make them laugh. Bob thought that sharing knowledge and information was one of the greatest things that he could do. Through his work he met some of his dearest friends, such as Arthur and Scott. Bob was a kind, supportive sibling and friend. At an early age, he became his sister Susan’s staunch ally—often pulling her wheelchair up flights of stairs to ensure that she could keep up with her able-bodied companions. Bob and his father founded a Boy Scout troop that supported boys with limited abilities. He shared memories of pulling a “red wagon on steroids” so that other boys could participate in outdoor activities. He continued to demonstrate this caring attitude when he provided support for his dorm mate, Greg, who experienced medical challenges. Later in life, Bob took care of his mother and sister during several serious illnesses. Bob was an enthusiastic traveler who visited nearly every U.S. state, the majority of Canada, and Great Britain. He was an active member of the BMW Car Club and particularly enjoyed going to “OFest” where he enjoyed learning new advanced driving techniques and meeting new people. Just prior to his passing, Bob was making plans to resume his travels by visiting friends and family. His personal email names would quickly tell anyone of his love of seeing the world. Bob will be sorely missed. Stacey describes him as “witty, fun-loving, and fiercely protective of all those he loved. In addition, he was very thoughtful, creative with art and words, reflective and sensitive, but never failed to tell you what was on his mind.” In order to honor Bob’s memory, and his love for his beloved pet Lolly, please consider making a donation to the animal welfare charity of your choice, in lieu of flowers. To access LIVESTREAM of service, please click the link below: http://webcast.funeralvue.com/events/viewer/57145

Robert Martin DeVault was born on August 23, 1964 in Heidelberg, Germany. Bob was preceded in death by his parents, Annette and David, and his older sister, Susan. The DeVaults, who met in Germany while David served in the U.S. Military, eventually... View Obituary & Service Information

The family of Robert "Bob" Martin DeVault created this Life Tributes page to make it easy to share your memories.

Send flowers to the DeVault family.