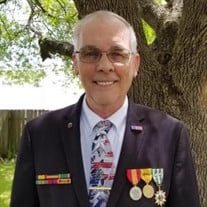 Richard Melvin Yearsley Jr., aged 73 of Webster, Texas passed away on April 24th, 2021. Richard was born July 21, 1947 to Richard Melvin Yearsley Sr. and Beatrice Elizabeth Yearsley, in Woodbury, NJ. Richard met Kathy Louise Taylor in 1969 at the Stardust Club in Long Beach, California where Kathey worked at the time. They immediately fell in love, and he married her on September 19, 1970 in Los Angeles, California. Richard was a Payroll Supervisor and Head Accountant for Austin Industries from 1974 until he retired in 2011. Richard was a United States Navy Veteran. He was a Third Class Radioman assigned to the USS Vernon County LST-1161. He enlisted in April of 1966 and was honorably discharged from the Navy in April of 1972. He received a total of 13 medals including awards, citations, and campaign ribbons. Richard was a member of the League City Concert Band where he was the bands lead drummer. He was a member of the First Baptist Church of Webster for twenty plus years. At the church, he was a Trustee. He was also a member of the church choir, bell choir, and would regularly perform music specials. Richard’s hobbies included spending time with his wife, kids, granddaughters, and Great Grandchildren. Saying he loved music is an understatement. In his lifetime, he learned and mastered the drums. He also loved playing and self taught: The harmonica, piano, and xylophone. He had a beautiful deep tenor voice, and loved to dance. He loved all genres of music, but his favorite was classic Rock and Roll. More specifically, his favorite band was The Beach Boys. He loved playing x-box games with his Granddaughters, and regularly played board games and cards with his family. He wrote poetry, and loved all things that challenged him intellectually. He loved woodworking, and working in his “shop”. He built furniture, and refurnished things around the house. He was a jack of all trade, and our families “handyman”. He was a snazzy dresser, and his favorite past times were fast cars and freedom. He was full of laughter, and enjoyed an audience for his shenanigans and comradery. He was quick witted, and very intelligent. He was stern, but fair. He had a big heart, and always gave the best advice. He was charismatic, and made an impact on everyone he met. To sum Richard up; He was a God-fearing, patriotic man who worked hard to provide for his family. He was an amazing brother, a wonderful husband, a great father, the coolest grandfather, and an honorable friend. Best of all, he gave the best hugs. Richard was survived by his wife Kathey Louise Yearsley, of Webster, Texas. Two daughters: Hiley Schlesinger, of Texas. Edna Stickley, and spouse John Stickey of Texas. Two sons: Timmy Bedwell, of Arkansas. Kenny Bedwell, of Texas. Six Granddaughters: Shanelle Schlesinger, of Georgia. Amber Jordan and spouse Josh Jordan, of Georgia. Courtney Schlesinger and fiancé Jody Clemons, of Texas. Natalie Schlesinger, of Texas. Brianna Stickley, of Texas. Jonica Stickley, of Texas. Three great Grandchildren: Cadence Porter, of Georgia. Ian Adkerson, of Georgia. Ruthie Jordan, of Georgia. Two Sisters: Sandra Yearsley Swink, and spouse Robert Swink of California. Christine Yearsley Dzienis and spouse Chester Dzienis, of Oregon. One Brother: George Yearsley, of California. Taps Day is done, Gone the sun, From the lake, From the hill, From the sky. All is well, Safely rest, God is nigh. Thanks and praise, For our days, Neath the sun, Neath the stars, Neath the sky, As we go, This we know, God is nigh.

The family of Richard Melvin Yearsley Jr. created this Life Tributes page to make it easy to share your memories.

Send flowers to the Yearsley family.