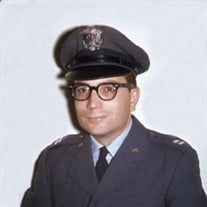 Obituary for Richard A. Philpott Richard A. Philpott passed away on April 7, 2022. He was born on April 1, 1940 in Coady, Texas (near Baytown) to Tula Clay (Dever) and Seaborn Jasper Philpott. Richard graduated from Sam Houston State Teacher’s College with a Bachelor of Business Administration in 1962. He married the love of his life, Dollie Ann (Karraker), on September 24, 1962. He served in the United States Air Force as an Officer and went to the Vietnam war for the year of 1967. Upon returning to the states, he lived in the Kirkwood subdivision for 38 years and worked as a computer programmer for Lockheed Martin, United Space Alliance, Computer Sciences Corporation, and the NASA Space Center in Clear Lake. He was responsible for writing the software for the U.S. Space Shuttle program. He retired in 1999 and enjoyed golfing, traveling and spending time with his family. He moved to Bellavita in Pearland in 2006 where he enjoyed the rest of his golden years. He is preceded in death by his parents; brothers, Bill, Robert and Paul Philpott; and his wife of 46 years, Dollie Ann. He is survived by his daughter, Tresa (Jerome) De La Cruz; his son, Ronald (Angela) Philpott; grandchildren Sierra Ann (Weston) Kimbro and Samuel De La Cruz; great-granddaughter, Arabella Ann Kimbro; sister, Barbara Clonts; and numerous nieces and nephews. Visitation will be Saturday, April 16, at 1 pm at South Park Funeral Home with funeral service to follow at 2 pm. In lieu of flowers, donations may be made to the Michael J. Fox Foundation at https://www.michaeljfox.org. If you can't join the family for services on Saturday you can watch the service via live stream at this link http://webcast.funeralvue.com/events/viewer/72156/hash:670EC92584EF7F0A

Obituary for Richard A. Philpott Richard A. Philpott passed away on April 7, 2022. He was born on April 1, 1940 in Coady, Texas (near Baytown) to Tula Clay (Dever) and Seaborn Jasper Philpott. Richard graduated from Sam Houston State Teacher&#8217;s... View Obituary & Service Information

The family of Richard Albert Philpott created this Life Tributes page to make it easy to share your memories.

Obituary for Richard A. Philpott

Send flowers to the Philpott family.