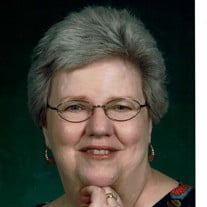 Peggy Lee Nabors, of Little Rock, Arkansas went to be with her God on Christmas Day, Dec. 25th, 2020. She was born on March 17th, 1946 in Houston, Texas to Carroll Wesley Tabb and Aileen Duncan Tabb. She is preceded in death by her parents and beloved sister, Patricia Ann Radford. She proudly graduated from Milby High School in 1964. She married Michael Nabors, of Sulphur Springs, Texas in 1966 in Houston, Texas. They divorced in 1983. She attended Lon Morris College and then went to work to fund college at various institutions to then graduate with a Bachelor of Science degree in Education from the University of Central Arkansas in 1971 and she and Mike settled in Harrison, Arkansas. She was a teacher in Harrison, Arkansas and Pulaski County Arkansas and then went on to the Las Vegas Classroom Teacher Association for several years. After that, she worked for the Shreveport, LA Classroom Teacher Association. She was the Arkansas Education Association “AEA” President from 1984-1985. During her tenure, she famously battled then Governor Bill Clinton on the issue of teacher testing. Representing Arkansas teachers, she appeared on the Phil Donahue show debating Governor Clinton. She also appeared on the Today show and the MacNeil/Lehrer News Hour. It was during this time she and President Clinton and other state and national leaders formed a fond and mutually respectful relationship despite their differences. She he was frequently interviewed for local and national publications and a spokesperson many causes. In 1989 she established permanent residence in Little Rock and was the Uniserv Director of the AEA and Executive Director of the North Little Rock Classroom Teacher Association. She was active in lobbying at the state capital. She was a lifetime member of the UCA Alumni Association. In 1991 she was an original member of the Arkansas Travelers going state to state for primaries which assisted in getting Bill Clinton elected as President of the United States. Eventually, she was the Director of Legal Services at the AEA and worked for the Little Rock Education Association. Once she “officially” retired she was then asked to stay on approximately 2 more years for these positions, which she did. She was an avid public servant investing time and energy in causes she held dear such as being involved in Highland Valley United Methodist Church, where she had been a member since 1994. She served in numerous roles such as Chancel Choir, Highlander Sunday School Class, Church Council Team Member, Lay Member to Annual Conference, Vice Chair of the Nominations Team (Committee on Lay Leadership), Ex-Officio Finance Team Member, Ex-Officio Staff Parish Relations Committee Member, Office Angel, Pastor's Bible Study, HV Relaunch Team, Strong Women, Stephen Ministry and was a founding member of HV’s Embracing Diversity A Pathway to Inclusion, and frequently attended the Arkansas Methodist Conference. She also served on the Parent Advisory Council for the Conway Human Development Center where Melanie happily lives. Her unwavering love and dedication to Melanie’s care has been witnessed by her friends and family alike. She is survived by her loving son Michael Nabors and his spouse Krysta and their children, Wesley Nabors, Adeline Schenk, Lilly Schenk and Justin Nabors and her daughter Melanie Nabors, as well as her loving nephews Brent Radford and David Anzaldua and niece Kim Jones and husband Chad Jones. Peggy loved music, theater and books and was not only an interesting person to talk to but funny and easy to be around. Her wit and humor charmed even the staunchest of her political opponents many of whom became her friends. Her legacy is a beautiful, genteel, and strong woman and a force to be reckoned with. Her smile and hugs were contagious, and her family was always first in her heart. President Clinton stated it best when he called Mike to say, “the world could use a lot more people like her.” We were proud of her and she will be greatly missed. In lieu of flowers, donations may be made in Peggy’s name to Conway Human Development Center and to the Highland Valley United Methodist Church Music Department. Her family is planning a Zoom memorial service at Highland Valley United Methodist Church on a date to be determined. If you cannot join us, you can click on the link and join us online: http://webcast.funeralvue.com/events/viewer/44037

Peggy Lee Nabors, of Little Rock, Arkansas went to be with her God on Christmas Day, Dec. 25th, 2020. She was born on March 17th, 1946 in Houston, Texas to Carroll Wesley Tabb and Aileen Duncan Tabb. She is preceded in death by her parents and... View Obituary & Service Information

The family of Peggy Lee Nabors created this Life Tributes page to make it easy to share your memories.

Peggy Lee Nabors, of Little Rock, Arkansas went to be with her...

Send flowers to the Nabors family.