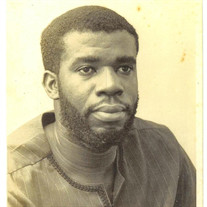 Oscar Derrick Pollard (Captain Pollard) was born on October 18, 1944 in Georgetown Guyana. He was the first born of George Regerton and Amy Angelina Cox- Pollard. Oscar’s early life at Bartica exposed him to multiple experiences and he took full advantage of them. He was an altar boy in the Anglican Church, tenor singer in the “Music Lovers Club” directed by his Dad, where my Mom and I sang first soprano. He did gardening at his school, sewing, drama and bread baking every week. He was casted in the drama “ Hamlet Prince of Denmark” while at QC. He always excelled academically. In 1956 he gained the coveted Government County scholarship at age 12, which earned him a place in the prestigious Queens College in the city. His then principal V. J Sanger Davis and faculty members, Mr. C. O Perry and Mr Neville Trotz observed his scholastic abilities. His ambition to study medicine was aborted due to the exorbitant cost, so he opted for science and economics. Oscar married Floret Glinton of Turks and Caicos Islands in 1983, lived in the Turks and Caicos, Miami Florida and later established their home in Missouri City,Texas, where they lived up to the time of his demise. He has one daughter, Ardith (Pollard) Hampton of New York. He has four grandchildren, Yvonne, Torrance, Diamond and Serenity and two great grandchildren. Oscar has one surviving sister Eileen (Pollard) Parke in Houston Tx. Three other siblings pre deceased him, Doreen Pollard, Godfrey Pollard and Victor Callender. Mourning his loss are brothers in law, Thomas Parke and Harrison Paul of Houston Tx. Sisters in law, Mrs. Peggy Payne of Houston Tx, Mr and Mrs Glenford Outten (brother and sister in law) of the Bahamas. Mrs. Lucy Dames (sister-in-law) of Turks and Caicos Islands. Numerous nieces and nephews. Abiola, Natille, Kebba,Thoren, David, Nastaciyah, Da’Shay, Andrew, Keron and Jay Parke. Assistant Superintendent of Police Guyana, Alwin Hoyte, Shonnette, Alex, Aaron and Andrew Hoyte of Guyana. Karel Pollard, Gaia, Ajani and Anae Pollard of Florida. Allister Pollard of Guyana. Lisa and Lynette Outten-Wilberg of Nassau Bahamas, Laurie Outten of the United Kingdom. Heath, Artley Paul and Heidi Purcell of Houston Tx. Fredrick, Deardrea, Oliver Dames, Wanda Coalbrook, Jermaine, Joey and Jimmy Glinton of Turks and Caicos. Cousins, relatives and friends: James McPhoy Cox, Jean Gilkes, Nigel Gilkes , Assistant Superintendent of Police, Turks and Caicos Islands and Eion and Kenneth Wiliams. The Wilkinson’s of Bartica and Kenny Hoyte of NY. Denise Lewis in NY. Hazel Sanmoogan. Norma Goodrich, Archie Clifton and others, Evelyn Lewis, Waveney Lewis, Stephanie Pollard, Nylon Pollard of DenAmstel and Others. The Bairds, Williams and Arlene Parke. The Jacksons all of Parika. The Cox’s, the Trotman’s and Simon McPhoye Clans of Wakenaam. Winston Ewing, June Emptage and the Duncans. Venus Alert Grenion and Family. Ronald Alert and Family. Lola Simon Assanah. Desiree Canzius and Family. Fred Cox and Family. Mrs. Lucille Skeete. Fathers,Terrence and Patrick Rosheuvel, and Father Lloyd Andries. Pastor Hilton Garnett. Friend of the Ex GDF Soldiers associations. Albert (Scotty, Benjie,)Bejamin. Carl Morgan. IC Fraser, Maxwell Hinds, and Former President of Guyana, Bridg. David Granger. Desrey Lyken, Maxine Jackson, Bryan Kissoon, Pamela and Cicely Peters, Burchell and Edgar Jordan and Vijaya Mackrandilal. While attending Queens College, Oscar enrolled in the QC cadet corps which “wet his appetite” for the military. Graduating from QC, Oscar taught math, physics and science –mainly physics at Tutorial High School. Imagine, it was torture for me being one of his physics students….it was tough. “I couldn’t handle it.” Oscar was appointed secretary of the Georgetown YMCA in Albouystown, he embraced the challenges of that inner city location, gaining the respect and appreciation for his leadership skills. Later, Oscar joined the British Guyana Volunteer Force(the army) and was sent to Mons Officer Cadet School in England for higher training. He was awarded a commission upon induction. 2nd Lt. ODP was a platoon commander in the 2 Coy. ( company) He was involved in the planning, commandeering and strategizing the operation, to recover the Rupununi following the uprising. Oscar was appointed managing director of Guyana Glass Works Factory in Timerhi. He was the brain child of (Guyana Veteran’s Foundation Rest Home). Guymine at Linden also benefited from his expertise. Oscar also led the team at UMDA. He studied and graduated from UG(University Of Guyana) with a BSC in Business Administration and Economics and continued his studies here in the USA. In 1980, Oscar moved to Turks and Caicos where he worked as a consultant for Rockefeller Brothers of New York, where he founded “The Turks and Caicos National Trust.” He continued his work as a consultant in South and Central America and in the Caribbean. Oscar returned to Guyana for a short period and along with Mr. Stoll of Croal Street developed a chemical free food dehydration system. Oscar continued his work up to the time of his death even though he described himself as being “semi retired.” Oscar lived a well accomplished, hard working and satisfying life. He always aimed to improve the lives of others. He will be missed by many, at home and abroad. If you are unable to join us at South Park Funeral Home for services you can click on the link provided and watch as we remember Mr. Pollard: http://webcast.funeralvue.com/events/viewer/46965

Oscar Derrick Pollard (Captain Pollard) was born on October 18, 1944 in Georgetown Guyana. He was the first born of George Regerton and Amy Angelina Cox- Pollard. Oscar&#8217;s early life at Bartica exposed him to multiple experiences and he... View Obituary & Service Information

The family of Oscar Derrick Pollard created this Life Tributes page to make it easy to share your memories.

Send flowers to the Pollard family.