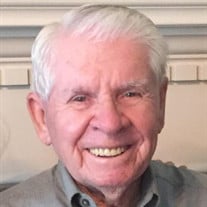 Nelson J. Iglesias passed away on January 2, 2021, surrounded by love, in the company of his wife and two daughters. He was born on September 3, 1941 to Fermin and Ofelia Iglesias in Mexico. Nelson was a loving son, brother, husband, father, grandfather, father-in-law and dear friend. He provided security, inner strength, and unconditional love to his family. Nelson was married to his wife for 50 years with whom he shared his love for books and walks in the park. He taught his daughters to work hard and persevere. He spent quality time with his family by sharing his love for movies, music, baseball, or simply having a cup of coffee. Nelson enjoyed spending time with his granddaughters by appreciating nature, working on jigsaw puzzles, and having a great sense of humor. He always lent a hand to his sons-in-law whether it was in gardening or mechanics. Most importantly, Nelson shared his love for Jesus Christ, devotion to the Virgin Mary, and everlasting faith in God with family and friends. Nelson strongly believed his love for God and the Holy Spirit led to his achievements. Along with his intelligence, determination and strong work ethic, Nelson obtained a two-year degree in Philosophy and Literature in Monterrey, Mexico. Nelson and his wife moved to the United States to seek better opportunities and worked together to provide for their family. He was employed by Azrock for 16 years and Shasta Beverages for 25 years. Nelson was active in his church by selling candles for 8 years and serving as an usher. He was also a member of the Holy Name Society. Nelson is survived by his wife, two daughters, two granddaughters, two sons-in-law, two sisters, nieces, nephews, and other relatives. On January 12, 2021, Nelson’s funeral was held at South Park Funeral Home and Cemetery in Pearland, TX. Nelson was a ray of light and will be deeply missed.

Nelson J. Iglesias passed away on January 2, 2021, surrounded by love, in the company of his wife and two daughters. He was born on September 3, 1941 to Fermin and Ofelia Iglesias in Mexico. Nelson was a loving son, brother, husband, father,... View Obituary & Service Information

The family of Nelson Javier Iglesias created this Life Tributes page to make it easy to share your memories.

Send flowers to the Iglesias family.