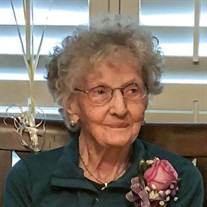 Miriam Hope Williams, 106, of Pearland, Texas, passed away peacefully to be with her Lord and Savior on June 26, 2021. She was born in Loma, Colorado on December 15, 1914 to Mathias T. Nelson and Florence Jenny Montgomery. After growing up in Nebraska on a farm and helping her father in his hardware store, she attended business school in Denver. She first accepted a position with the FBI in Washington, D.C. and then after transferring to Denver with the FBI, she took a position with Continental Airlines. She met her love, John Duncan Williams, Jr., in Denver at a dance by the Timberline Club. In a whirlwind courtship, they were married four weeks later in September, 1945. His career took them to such wonderful places as the Philippines, Florida, California, Virginia, then Pearland, Texas and to East Texas, Colorado and back home to Pearland. While in the Philippines, their son, John Duncan Williams, was born. As circumstances allowed, Miriam worked at many interesting offices from managing a busy doctor’s office to working at NASA-JSC. She was an excellent homemaker, a gifted seamstress and tailor, making sports jackets for her husband and son, as well as many of her own clothes including beautiful quilted jackets and quilts. She loved to travel and she and Dunc traveled to Denmark and Norway on vacation to find where her father was born and where he lived before his mother immigrated to America with him and his younger brother. She also traveled to the Holy Land twice, the last when she was 80. Their travels also included many lovely places here in the States. When they retired to Colorado, her faith in the Lord was growing and she was seeking to learn more. She felt the Lord leading them to Colorado and so they went. There she found a church that aided in her spiritual growth in the Lord and the Holy Spirit. She was a member of a Christian women’s group, loved the Lord, loved serving and helping others and was always ready to share her faith and tell others about Jesus. She also enjoyed walking and had many special walks on her birthday with the first one on her 80th. These walks went from their house in Canon City to the top of Skyline Drive. She invited friends to join her and several did. At the time of her death, she was probably the oldest living person in Pearland, according to the Pearland Historical Society. She was preceded in death by her mother and father, Mathias and Florence Nelson; sister, Lois Nelson; sister, Geneva Fetrow; grandson, Scott Williams; and husband, John Duncan Williams. She is survived by her son and daughter-in-law Duncan and Jackie Williams; granddaughter and husband, Holly and John Lyons; great granddaughter, Abigail Lyons; great grandsons, Jackson Lyons and William Lyons; as well as beloved nieces Pam McElroy (Randy); and Claire Whitmore (Wayne). She is also survived by beloved nieces and nephews on her husband’s side. Visitation will be held Tuesday, July 6 at 10:00 a.m. and a Celebration of Miriam’s Life will begin at 11:00 a.m. at South Park Funeral Home located at 1310 N. Main, Pearland, Texas. The family requests that any memorial gifts may be given to her church El Cordero De Dios Templo Cristiano, 12515 Astoria Blvd., Houston, TX 77089.

Miriam Hope Williams, 106, of Pearland, Texas, passed away peacefully to be with her Lord and Savior on June 26, 2021. She was born in Loma, Colorado on December 15, 1914 to Mathias T. Nelson and Florence Jenny Montgomery. After growing up... View Obituary & Service Information

The family of Miriam Hope Williams created this Life Tributes page to make it easy to share your memories.

Send flowers to the Williams family.