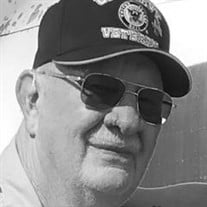 Michael “Mike” Gervase Johnson, of Pearland, TX, passed away May 24, 2021 just a few days shy of his 80th birthday. He was born on May 31, 1941 in Little Falls, MN to Alfred Nathaniel Johnson and Gisella Marie (Mayer) Johnson. Mike was a member of the 1960 graduating class of Motley High School. After high school, he joined the US Navy and rose to the rank of First Class Petty Officer, serving from 1961-1971. He was stationed at Newport, RI, Whidbey Island, WA and Rota, Spain. Upon leaving the military, Mike continued to travel all over the world for many years as a Field Service Supervisor for Dresser-Rand until his retirement in 2007. Along the way he met and married Kay Stinson on October 30, 1976. They were married for more than 40 years until her passing in 2017. Mike never met a stranger. He was a master storyteller, with a smile and a joke always at the ready. He was funny and so easygoing that he put everyone else around him at ease. Mike was a lifetime fan of anything to do with trains and the railroad. He was also a HUGE fan of Kelley’s Restaurant in Pearland and made sure that anyone visiting him was also introduced to Kelley’s or the Chinese Buffet or some great Mexican food…he will be missed by so many. Mike Johnson is survived by daughter and son-in-law, Virginia Gisella and Mark D. Terry of Harrodsburg, KY; son Mickey Kurt Johnson of Pasadena, TX; daughter Kathleen Sue (Johnson) Wilkinson and longtime boyfriend Divine Wright of Baytown, TX; grandson Phillip Martin Traver; granddaughter, Stephanie Christina Traver; grandson Tylan Gabriel Wilkinson-Hulse, granddaughter Lilli Eve Wilkinson-Hulse and great-granddaughter Violet V. L. Traver-Stoess. He is also survived by sisters Gloria Marie and husband Ebbie Stone; Ardyce Joan and husband Jeff “Sarge” Sargent, and numerous nieces and nephews. “Mike is pre-deceased by his parents, wife Kay, brother Lawrence Girard Johnson, sister Germaine Colette (Johnson) Miller , nephew Ralph “Randy” Joseph Daigle, Jr. and great-nephew Jarvis James Hartfiel.”

The family of Michael Gervase Johnson created this Life Tributes page to make it easy to share your memories.

Send flowers to the Johnson family.