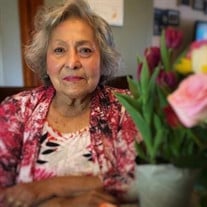 Matilde Rojas Porraz, 83, of Houston, Texas went to be with the Lord on September 14, 2021. Matilde was born on March 14, 1938 in Comales Tamaulipas, Mexico. She was the 7th child of Sostenes and Antonia Rojas. During a visit to Austin, Texas to see her brother, Reyes Rojas, her brother introduced her to his good friend Roy Porraz. They were married on May 19, 1962 at Primera Iglesia Bautista in Austin. They soon moved to Houston, Texas where she lived the remainder of her life. She served her churches Primera Iglesia Bautista of Pasadena, Broadway Baptist Temple, and First Baptist Church South Houston in various ministries such as Sunday School teacher, Womens Missionary Union leader, and choir member. She loved music, gardening, crafting, and spending time with friends and family. She was always eager to help anyone in need as she “never met a stranger, everyone was a friend”. Her joy and laughter could fill a room. She will be missed by friends and family. She is survived by her two daughters, Sandy Borrego of LaPorte, Texas and Velma Porraz of Houston, Texas and two grandchildren, Laura Borrego and Jacob Borrego of LaPorte, Texas. Preceded by death by her husband Roy Porraz, son-in-law James Borrego and parents Sostenes and Antonia Rojas of Rio Bravo, Mexico. Survived by her sister Josefina Rojas, sisters-in-law Mary Alice Rojas, Maria Dolores Mora Rojas, Maria de Jesus Rojas, Ana Maria Rojas, Edith Gonzales, Eva Dorman, and Irma Porraz. Preceded by death by siblings Andy Rojas, Reyes Rojas, Jesus Rojas, Elias Rojas, David Rojas and Sara Rojas and sisters-in-law Consuelo Aguilar and her husband Felipe, and brothers-in-law Manuel Porraz, Emma Rodriguez, Jesse Porraz and his wife Sarah. Funeral services are as follows at South Park Funeral Home in Pearland, Texas. A time of visitation will be held on Thursday, September 23 at 9:00 a.m. with service at 10:00 a.m. and internment to follow at South Park Cemetery in Pearland, Texas. If you cannot join us for services at the funeral home, you can join us online by clicking on the following link:http://webcast.funeralvue.com/events/viewer/60864/hash:3D816DE4317572B0

Matilde Rojas Porraz, 83, of Houston, Texas went to be with the Lord on September 14, 2021. Matilde was born on March 14, 1938 in Comales Tamaulipas, Mexico. She was the 7th child of Sostenes and Antonia Rojas. During a visit to Austin, Texas... View Obituary & Service Information

The family of Matilde Porraz created this Life Tributes page to make it easy to share your memories.

Matilde Rojas Porraz, 83, of Houston, Texas went to be with the...

Send flowers to the Porraz family.