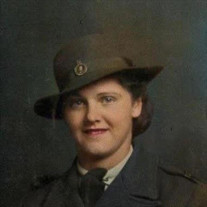 Margaret Violet Milligan (Mum or Marge) was born on the 15th March 1924 to Mary Anne and Samuel Milligan in Forest Gate, London, UK. Her mother worked &#8216;In Service&#8217;, keeping house for a family in the Forest Gate area and her father... View Obituary & Service Information

The family of Margaret Violet Fallows created this Life Tributes page to make it easy to share your memories.

Margaret Violet Milligan (Mum or Marge) was born on the 15th...

Send flowers to the Fallows family.