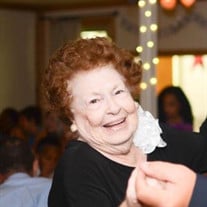 Majo Russell Terry, 92, passed away peacefully after a short illness on August 21, 2021 in Big Spring, Texas where she had most recently resided, to be closer to family. Majo was born on May 20, 1929 in Childress, Texas to Lonnie Russell and Audrey Mae Stoddard. She was the 4th of 5 children and was raised on a farm outside Matador, Texas. In her younger years, she was known for pulling a good prank. She talked about chasing calves and pull their tails just for the fun of it! On October 13, 1945, At the age of 17, she married Leslie Terry at the First Methodist Church in Plainview, Texas. While raising their family in Matador, Majo worked as a waitress and a telephone operator for General Telephone Company. Majo and Les relocated to Victoria and then onto Houston, where Les worked as a welder, building the John Sealy Hospital. After moving to Houston, Majo became a bank teller, working for Bank of Texas in downtown Houston until her retirement. Majo and Les lived for many years in the Pearland area. Majo loved working in her yard and had a green thumb. She could grow just about anything. In her younger years she loved to play softball on a Bank of Texas team with her co-workers. She also loved to dance and was active in square dancing for a number of years. Majo was full of life and spunk until Jesus called her home. She enjoyed traveling, socializing with friends and family, and shopping at her favorite store, Chico’s. Some of her favorite memories included vacationing in the mountains of New Mexico and Colorado, parasailing in Acapulco, and visiting family in Washington state. She is preceded in death by Leslie Terry, her loving husband of 36 years; her son, Wilburn Terry, her parents, 1 brother, and 3 sisters. She is survived by her daughter Rosanne Terry West and husband Ron of Big Spring, Texas and her sister Leatrice Cullison of Rosenberg, Texas. She was affectionately referred to as “Mema Terry” and is survived by her grandchildren Ronda Turnbough and husband Brian, Becky Woodall and husband Matt, all of Big Spring, Texas, Colleen Fallon and husband Michael of Louisville, CO, Joann Hadaway and husband Glen of Parker, Texas, Elizabeth Ledbetter and husband Bobby of Pearland, Texas, and Charlene Terry of Wharton, Texas. She is also survived by 15 great grandchildren; Jonas, Aaron, and Audrey Turnbough, Kaeli, Colt, and Maggie Woodall, Sean and Claire Fallon, Maya and Adison Hadaway, Andi and Eli Ledbetter, Danielle Caro, and Zoey and Kamryn Daughtery; along with numerous beloved nieces, nephews, cousins, and friends. She will be dearly missed by them all.

Majo Russell Terry, 92, passed away peacefully after a short illness on August 21, 2021 in Big Spring, Texas where she had most recently resided, to be closer to family. Majo was born on May 20, 1929 in Childress, Texas to Lonnie Russell and... View Obituary & Service Information

The family of Majo Terry created this Life Tributes page to make it easy to share your memories.

Majo Russell Terry, 92, passed away peacefully after a short...

Send flowers to the Terry family.