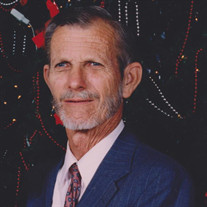 Louis S. Dement, known as "Buddy" to his family and friends, was born to Alvean and Fay Dement on October 25, 1938; the last of three children. Buddy left this earth on October 4, 2020. He is preceded in death by his mother, father, sister and brother-in-law Winnie Fay and "Buck" Curtis, sister-in-law Jeanette Nivens, and his wife Bette. Buddy graduated from Angleton High School and entered the US Army, where he trained as an airplane mechanic. After being honorably discharged, he continued to work as a mechanic, first in the oil industry and later in the automobile industry. He also briefly studied to be an electrician, as a complement to his mechanical skills. He was always willing to help family, friends, and neighbors with repairs of any kind, and they were grateful for his skills. He could fix almost anything. When he left his job at Hutchison Hayes, he received a job recommendation stating he could fix anything except a broken heart and the crack of dawn. He retired from Archer Motors in 2003. He met his wife-to-be, Bette, through a mutual friend, and they were married on July 3, 1965. They had 2 children together, and celebrated their 50th wedding anniversary in 2015. They had 54 years together, until her death in 2019. Buddy enjoyed fishing and hunting, and read the newspaper daily through his working years. It wasn't until he retired that he learned to enjoy reading fiction. One of his granddaughters introduced him to "Hank the Cowdog", and it so tickled him that he read the whole series. He was hooked, and went on to read many other authors of both children's and adult fiction. He was also very fond of telling stories himself. Whether it was something that happened at work, a television show he was watching, or a story he read somewhere, if he found it interesting, and especially if he found it funny, he wanted to share it. But he would never share it with a crowd; almost always it was one-on-one with someone he thought would also enjoy it or find it interesting. He is survived by his daughter Sheri Dement, his son Jerry Dement and Jerry's children Jarrett (Hali), Harmony, and Katrina; his brother Tommy (Elsie) Dement and their children Lonnie (Sandra), Kenny, Roger (Christie), and Dwaine (Julie), their grandchildren Misty, Lyndee, Megan, Allison, "TJ", and Charlotte, and great-grandchildren Wyatt, Rae, and Ryleigh; his nieces Ranee (Dennis) Reddick and Lisa (Mark) Covanec, and nephew Shane (Rebecca) Dement and their families. He is also survived by his sister-in-law Lisa LeJeune and her children, Chelsea (Jose) Olivares, Ashley LeJeune, and Justin LeJeune, and by his nieces Traci and Staci Nivens. Visitation will be Friday, October 16, 2020 at 10:00am at South Park Funeral Home, 1310 N Main St, Pearland, Texas 77581, with funeral and graveside services to follow at 11:00am. If you are unable to attend the service by would like to watch via live stream please click on the following link: http://webcast.funeralvue.com/events/viewer/38315

Louis S. Dement, known as "Buddy" to his family and friends, was born to Alvean and Fay Dement on October 25, 1938; the last of three children. Buddy left this earth on October 4, 2020. He is preceded in death by his mother, father, sister and... View Obituary & Service Information

The family of Louis Schumann Dement created this Life Tributes page to make it easy to share your memories.

Louis S. Dement, known as &quot;Buddy&quot; to his family and friends,...

Send flowers to the Dement family.