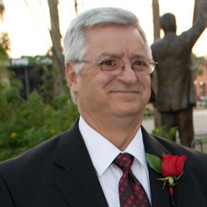 Lawrence Allenday, Jr passed away peacefully on Saturday, February 19, 2022, at the age of 72. He was born in Opelousas, Louisiana to Lawrence, Sr and Dora Allenday in July 26, 1949. He grew up in several small towns around the Opelousas area before graduating from Washington high school in 1967. After high school he joined the Merchant marines and worked with them for a couple of years before he was drafted into the army in 1969. He was sent to Vietnam in 1970 and spent most of his time on base in Bien Hoa. He talked about the patrol walks he had to do and how it was so hot it would make his ears ring. After returning to the United States and being discharged from the army, he came to Houston to work with his brother-in-law, Sherrel. After working with him for a few years, he then began picking up work at the Port of Houston as a Longshoreman, where he worked on and off for the next twenty years of his life. In 1972, he met Patricia and they wed in 1976. They moved to Pearland in 1978 where they raised two daughters. He could be found most days walking around the yard drinking his coffee and tinkering with things near his shed. He loved to barbeque and made homemade beef jerky. Lawrence enjoyed spending time with his family and tried to make as many trips back to Louisiana as he could to visit. He loved to make gumbo and a few times a year would raise the “gumbo flag” for anyone that could stop by. He loved to garden and would plant a big vegetable garden every year, which he would share most of his veggies with anyone who wanted some. Most of all, he loved his grandchildren. He doted on them and spent as much time as he could with them. They all love their “Papa” and riding on his tractor. His siblings called him “Brother” and his nieces, nephews and cousins affectionately called him “Uncle Brother”. He is preceded in death by his parents, his sister Elsie Rabalais, his two brother-in-laws: Sherrel Rabalais and Phillip LeBert, and his granddaughter Courtney Joyce. He is survived by his wife of forty-five years, Patricia Allenday; his stepdaughter, Lisa Hardcorn and husband Randy, daughters; Melanie Doneson and husband Mike, Lauren Brownlee and husband Scott; His brother Johnny Allenday and wife Michelle, His sisters Linda Smith and Mary LeBert, His grandchildren Ashton Joyce, Ella Brownlee, Mikey Doneson, and Nico Doneson; along with numerous nieces, nephews and cousins.

Lawrence Allenday, Jr passed away peacefully on Saturday, February 19, 2022, at the age of 72. He was born in Opelousas, Louisiana to Lawrence, Sr and Dora Allenday in July 26, 1949. He grew up in several small towns around the Opelousas area... View Obituary & Service Information

The family of Lawrence Allenday Jr created this Life Tributes page to make it easy to share your memories.

Send flowers to the Allenday family.