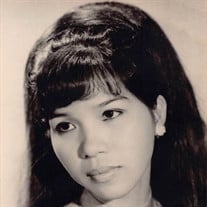 Ky Nguyen Sutton, 76, of Houston, TX passed away on July 13th, 2021 with her daughters by her side after a lengthy battle with liver disease and cholangiocarcinoma. She was known as Meme by her four grandchildren, who were the light of her life and she loved to spoil. She was also a devoted wife, mother, sister, aunt and friend who was truly the matriarch of her large extended family. She loved socializing and making people laugh. She has been described as energetic, committed, selfless, funny and very feisty. Ky’s main passion was cooking; and the dish she was most proud of and known for were her eggrolls. She also enjoyed gardening, traveling, yoga, Zumba and shopping. Ky was a committed volunteer for the Phat Quang Vietnamese Buddhist Temple in South Houston for many years where she of course helped in the kitchen. Ky never met a stranger and was generous with her love, time and especially with food…no one ever went hungry in her presence. Ky was born in Thai Binh, Vietnam in December 1944. Her family fled from North Vietnam to Saigon during the war. She went to school to learn sewing and then took English and administrative courses with the US Air Force. She then began working as a contractor/administrative clerk for the US Air Force, where she met her husband, Ricky. They married in 1970 and began their life together in Washington, DC where they welcomed their first daughter, Kim, a year later. They also lived in Peoria, Illinois and then San Antonio, TX where they welcomed their second daughter, Crystal. After Ricky left the Air Force, they settled in Houston, TX to be closer to Ky’s extended family in 1980. Ky began working at The University of Texas Health Science Center at Houston as an Administrative Clerk. She worked in various positions at UTHealth and was able to retire after 32 years of service. She paved the way for her daughters and husband who also worked there for many years. In 2017, Ky was diagnosed with liver disease and received a liver transplant in 2018 at the age of 73. Her doctors were all amazed at her resilience and tenacity during her recovery. In 2019 her beloved husband of 49 years, Ricky, passed away. She then was diagnosed in 2020 with Cholangiocarcinoma, an aggressive form of cancer in the bile ducts. She was easily loved by her doctors, nurses and caregivers. She fought a brave battle and never gave up hope. She will be lovingly remembered by her daughter, Kim Edmonsond, daughter Crystal Sharp and Husband Kevin; four grandchildren: Kailen, Jordan, Clayton and Olivia; 7 brothers and sisters and many cousins, nieces and nephews. Ky was preceded by her parents, stepmother and husband. Her legacy will live on in the hearts of everyone who knew her. Memorial contributions may be made to the American Liver Foundation, American Cancer Society or Life Gift Texas. Please join us for a visitation and memorial service to celebrate the life of Ky Sutton on Wednesday, July 21st, 2-6 pm at South Park Funeral Home, Pearland, TX. Please bring your fondest memories of Ky to share with family and friends. Masks are required for those who have not been fully vaccinated. A private committal will follow on July 22nd at Houston National Cemetery with close family and friends. If you cannot join us in person for the visitation/memorial service, you can join us live online by clicking on the following link: http://webcast.funeralvue.com/events/viewer/57411/hash:21D155791E99AC8A

Ky Nguyen Sutton, 76, of Houston, TX passed away on July 13th, 2021 with her daughters by her side after a lengthy battle with liver disease and cholangiocarcinoma. She was known as Meme by her four grandchildren, who were the light of her... View Obituary & Service Information

The family of Ky Nguyen Sutton created this Life Tributes page to make it easy to share your memories.

Send flowers to the Sutton family.