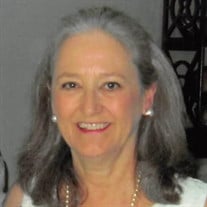 On Monday, February 1, 2021, Kathy Hall Nelson, wife of Bob Nelson, passed away peacefully at her home with her loving husband by her side. Kathy was a lifelong Houstonian, born in 1955 to Herbert Murl Hall and the late Margaret King Hall. She was the youngest of three children and was loved dearly by her older brother and sister. As a child she enjoyed tap and ballet lessons, and could captivate an audience with her big brown eyes as she danced her way across the stage at every recital. She parlayed her dancing skills into new talents when she became a member of The Red Raiders Drill Team and eventually a Johnston Jr. High School cheerleader. She was a great student graduating from high school a year early. She followed her brother and sister to Austin to attend The University of Texas where she earned a degree in accounting. At UT, she participated in spirit and service organizations, was a member of Community Business Services and was a little sister to Delta Sigma Pi, a business fraternity on campus. Upon graduation, she had job offers from California to Texas and chose to come back to Houston to begin her career with Ernst and Ernst as a CPA. In 1979, Kathy married Robert J. Nelson whom she met at UT. He was a CPA as well. After a few years of marriage they decided to become business partners and opened their own accounting firm, Nelson and Associates. As a member of the TXCPA Houston Chapter, Kathy volunteered her time to assist local charitable organizations with fundraising events. Kathy and Bob enjoyed fun trips through the years to Hawaii, Great Britain and the Caribbean. But their greatest adventure by far was their 3,000 mile motorcycle trip across the eastern United States in 2005. Kathy loved her family. Celebrating special occasions such as graduations and weddings for her nieces and nephews brought her great joy. Kathy was preceded in death by her mother, Margaret King Hall. She is survived by her husband of 41 years, Bob Nelson, her father, Herbert Murl Hall (Elsie), her brother, Glen Hall (Carol), and her sister, Vicki Daughdrill (Hal). She is also survived by nephews Brian Hall (Elizabeth), Eric Hall (Christina) , Jim Daughdrill (Libby) and nieces Andrea Hall Leggett (Zack) and Meg Daughdrill Flowers (Brian) plus a dozen great nieces and nephews. Also surviving her is her sister-in-law Carole Watkins Teien (Scott) and brother-in-law Robert Watkins and former sister-in-law Shellie Evans (Sam) mother of Brian, Eric and Andrea. Kathy was blessed to have wonderful caregivers the last few years of her life. Our hearts are filled with gratitude for: Iris Hernandez, Sharon Johnson, Martina Luna and Winnie Texada. A memorial service for Kathy will be held at a later date. In lieu of flowers, the family requests that memorials be sent to a charity of your choice in Kathy’s memory.

On Monday, February 1, 2021, Kathy Hall Nelson, wife of Bob Nelson, passed away peacefully at her home with her loving husband by her side. Kathy was a lifelong Houstonian, born in 1955 to Herbert Murl Hall and the late Margaret King Hall. She... View Obituary & Service Information

The family of Kathy Hall Nelson created this Life Tributes page to make it easy to share your memories.

Send flowers to the Nelson family.